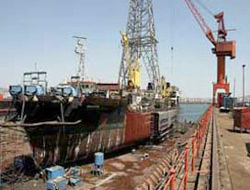 Turkey is jockeying to be the biggest European shipbuilder, but a spate of deaths shows the need for changes in the sector and the cost of spectacular growth on the fringe of the European Union.

Turkey is jockeying to be the biggest European shipbuilder, but a spate of deaths shows the need for changes in the sector and the cost of spectacular growth on the fringe of the European Union.

Financial markets in Turkey have been hit by concerns over legal attempts to ban the governing Justice and Development Party, speculation of coup plots and resistance among key powers to eventual Turkish EU membership, but at the Tuzla shipyards, in the so-called real economy, business is brisk.

The Turkish shipbuilding industry has raised its exports by 30 percent in the past year by focusing on high-value, made-to-order ships that are not available from larger-scale builders in China and South Korea. Exports are expected to make up 80 percent of total revenue in 2008 compared to 60 percent last year.

"Turkey is similar to Spain, Poland, Croatia and other European shipbuilding countries, but Turkey is surpassing these countries," said Vidar Smines, a shipbuilding consultant for Ulstein Group. "Here the value per vessel is higher so Turkey is more important in international shipbuilding than statistics reveal."
However, with 25 deaths in the last 11 months at Tuzla, on the northern shore of the Sea of Marmara, the sector has become emblematic of the mixed blessing of rapid growth in trade ties brought on by Turkey's EU candidacy.

"Most of these accidents happened because the sector was caught unaware by this growth," said H. Erkan Selah, owner of Selah Shipyards, which was closed earlier this year after two workers at his yards were killed in the same week - one crushed by a two-ton metal plate.

Selah says he takes the appropriate measures to educate and train his workers, but like other yards, he relies on temporary subcontractor labor, which accounts for 83 percent of all manpower in Turkish shipyards.

Economists say the unique Turkish position of having started EU negotiations while depending on a thriving market for temporary jobs to make itself internationally competitive creates a deadly mixture.

"The accession process to the European Union is a double-edged sword because it means there are increased opportunities for trade; and things look to be thriving in Turkey," said Surhan Cam, an expert on the Turkish labor market at Cardiff University, in Wales.
"But the formal employment sector is not growing proportionally, and for now in some sectors things are getting worse before they get better," he said.

Turkey faces a number of legislative as well as political hurdles in its bid for EU membership, which itself has been sidetracked by legal challenges to the governing party. The party started entry negotiations in 2005.
Still, experts say the changes embarked upon as part of the entry process, which includes the implementation of new labor laws, will not be stopped in the long term regardless of the current political climate.

"There may be hiccups along the way, but the path the country has chosen is one of reform," said Nick Kennedy of 4Cast financial advisers in London, who follows Turkey.

"It would take a lot to sidetrack that," he said. "It's not just to join the EU club, but in order to stay competitive in labor."

In a country with the lowest national income per head of members of the Organization for Economic Cooperation and Development, where many believe real unemployment is sharply higher than the official level of about 10 percent, the demand for temporary workers thrives.

Beki Akar is one of 35,000 people who work at the 44 shipyards in Tuzla. He has been employed at the yards for nearly a year, making 1,000 Turkish liras, or about $820, a month and sending half home to his wife and child near the Turkish capital of Ankara.

Like most shipyard workers, he lives with other workers and is hired on a daily basis by subcontractors who supply the Tuzla shipyards with its manpower.

The subcontractor system is one of the main obstacles to training experienced workers, and it allows shipyard owners to avoid responsibility when accidents happen.
"Workers are cheap," he said. "There are hundreds of people waiting to take your spot. That's why you don't refuse to do work or complain about the conditions."

Like other workers, he says safety equipment is shoddy at the shipyard where he works. Belts needed for work at heights of 100 meters, or 330 feet, are not reliable, and cranes that lift the huge plates that make up a ship can be faulty, sending them falling onto the crowded yards - as happened at the Selah yard.
Shipyard owners may have to take more responsibility for workers' safety to maintain Turkish economic growth.

"If Turkey can succeed in entering into more advanced tonnage markets - like offshore drilling - health and safety issues will become very important, because those conditions will be forced on shipyards by those who want the ships," Smines said.

The Turkish Shipbuilders Association has introduced a series of training measures which are to start in September, said Murat Bayraktar, the association's president.

But the head of a shipbuilding workers' union said those measures would not be enough to stop the accidents.

"Education is important but you have to make sure employers deal with the dangerous conditions these people are working in," said Cem Dinc, leader of the Limter-is union.

Even with better education, people working longer than seven and a half hours a day are likely to cause accidents regardless of how much training they have, he said.

"Until we start treating our workers with respect and give them humane working conditions these accidents will continue," Dinc said. "We can't accept conditions the way they are."

This news is a total 2246 time has been read