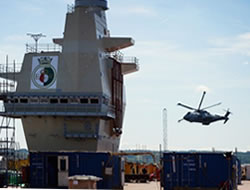 Britains biggest warship is now Britains tallest warship as HMS Queen Elizabeth reaches her maximum height with the addition of her final mast.

From the tip of the newly-installed pole mast to the keel, the gigantic carrier now stands 73 metres (239ft) tall, eclipsing Tower Bridge or Nelson’s Column.

With a draught of just shy of ten metres (33ft) it means the aircraft carrier towers 63 metres (206ft) above the waterline. The Queen will officially name the carrier at Rosyth on July 4, 2014.

To allow HMS Queen Elizabeth to pass safely beneath the road and rail bridges, the pole mast is lowered until it’s almost horizontal – before being raised again once safely through.

“The mast is home to antennae for communications systems which are a pivotal part of navigation and flight safety, so a solution had to be engineered to raise the Mast once the ship has transited safely underneath,” said Petty Officer Engineering Technician (Weapon Engineering) Johnson.

On its own, the pole mast is 19 metres (62ft) tall. The lower half is home to navigational lighting, while the upper part houses numerous radio and communications antennae.

The mast sits on a steel cartridge which houses two hydraulic cylinders and a hydraulic system which lower the structure to an angle of 77 degrees, before raising it back in place once through.

The chance to test the mast for real will come in late 2016 when HMS Queen Elizabeth leaves Rosyth to begin her sea trials.

This news is a total 1596 time has been read