BTC not a helper for Bosphorus 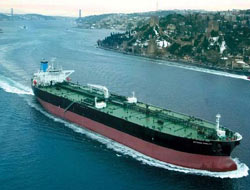 BTC Not A Helper For Bosphorus

Bakü-Tiflis-Ceyhan Pipeline (BTC) which was activated in 2006, couldn't decrease the loading of Bosphorus which is the traditional way for centuries of transporting 250 million tones energy material from Hazar Catchments to Europe.

Bakü-Tiflis-Ceyhan Pipeline, which was opened to service in 2006, couldn't lighten the traffic of Bosphorus and Dardanelle, which is traditional way of transporting the energy material from Hazar Catchments to Europe. In first 5 months 23 thousand ships passed with 1 million tones dangerous material by Turkish Straits (if compared with last year, it increased).

This news is a total 1516 time has been read