Built to respond to emergencies 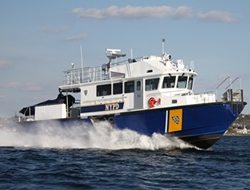 Measuring 61 feet on deck with a 17-foot beam and 3-foot draft, the boat was designed by C. Raymond Hunt and features the shipyard’s popular Chesapeake Class pilot boat deep-V hull. Unique to this hull design is the “squared-off” bow, with fendering and knees raised above the main deck to facilitate bow landings.

Designed and built to respond to emergencies across New York City’s waterways, the boat is both versatile and highly functional, said shipyard officials. The heated forward-leaning windows in the front and the side and aft windows on the flush-mounted pilothouse offer 360-degree visibility of search and rescue operations. The view is further enhanced from the fly-bridge.

In the forecastle is a patient triage area, with two upper and lower berths, a small, fully-equipped galley, and a head. Aft of the pilothouse is the diver’s ready-room, with a settee and table and a work counter. Behind the ready room, the open aft deck is partially covered by a removable canopy for the divers’ dressing table, gear, and scuba tanks, and a decontamination shower. On the aft deck is also a 13-foot inflatable tender, launched by a hydraulic, knuckle-boom crane.

Along the wide side decks are port and starboard rescue recesses with steps leading to a platform just above the waterline and a davit on deck for lifting a Stokes litter-basket stretcher onto the main deck. Rescues can be performed from the transom as well. The guard over the waterjets forms a platform on which a hinged rescue platform can be lowered and raised hydraulically.

The boat’s main propulsion comes from twin 10 cylinder MTU-10V2000M94 diesel engines, each producing 1600 Bhp at 2,450 rpm, giving the boat a top speed of over 35 knots, and at 25 knots a range of about 180 miles. The engines turn a pair of Hamilton HM521 water-jets through ZF3000 gearboxes. A 30 kW Northern Lights/Alaska Diesel generator provides service power.

The boat features heated decks and transom platform to prevent icing during the winter. The heating and air-conditioning, a chilled water/heated loop system, includes a 48,000 Btu chiller and an Espar 16kW diesel heater.