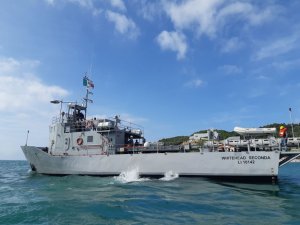 According to Sofia Globe, the deadline for bidders who have applied to supply Bulgaria with two new naval patrol vessels to update their offers has been extended by two weeks, to December 6, Defence Minister Krassimir Karakachanov said.

Karakachanov said that the request for the extension of the deadline had come from two companies, but he did not disclose the names of the companies, Bulgarian National Radio reported. “We are obliged, so that tomorrow there aren’t any comments that we rushed deliberately to favour someone at the expense of others,” Karakachanov said. He said that it was important that all participants in the bidding were well prepared to present their motivations for their proposals “and from then on to evaluate their offers”. The project envisages the two new vessels replacing the Soviet-era three. In July 2018, Bulgaria’s National Assembly approved an updated version of the project, envisaging spending a maximum 984 million leva, value-added tax included (about 503 million euro).

In April 2019, it was announced that three companies, one Bulgarian, one German and one Italian, had submitted bids to supply the Bulgarian Navy with two new multi-purpose patrol vessels. The three companies that met the April 16 5pm deadline to submit bids are Fr. Lürssen Werft GmbH & Co.KG of Germany, MTG Delfin AD of Bulgaria, and Fincantieri of Italy. The Bulgarian Navy currently has six naval vessels, three dating from the Soviet era and the rest second-hand former Belgian vessels. The three from the USSR era have difficulties in getting spare parts and are not compatible with the standards of the Nato alliance which Bulgaria joined in 2004.