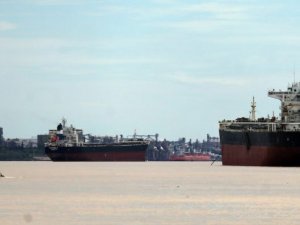 A cargo ship collided with a dock on the Parana River in Argentina’s grains hub of Rosario on Wednesday, causing a slowdown of activity at terminal 6 in the port of General San Martín and raising soymeal prices.

“The southern pier of terminal 6 is operational, with difficulties on the barge docks due to the blockage caused by the ship that generated the accident,” said Guillermo Wade, manager of Argentina’s Chamber of Port and Maritime Activity.

“The north dock of terminal 6 suffered some serious damage. One operator working in the area suffered a minor blow, but nothing serious,” Wade said.

Argentina is the world’s top exporter of soymeal livestock feed and the third biggest supplier of raw soybeans.

The ship, Ocean Treasure, was preparing to load up to 24,000 tonnes of corn and a total of 27,000 tonnes of soymeal, according to NABSA shipping agency data,

Terminal 6 is operated by AGD and Bunge.

“It did move markets … Meal got a bid,” a U.S. soy futures trader said of the boat collision. Chicago Board of Trade May soymeal futures jumped as much as $8 per tonne on reports of the accident, outpacing gains in soybeans. The contract was $3.90, or 1.2 percent, at $376.00 in afternoon trading.

This news is a total 954 time has been read
Tags: Bulk Carrier Crashes Into Dock at Argentine Grain Hub