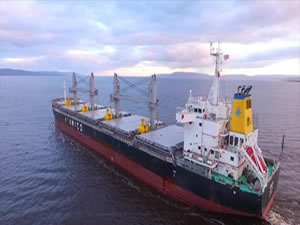 A crew member of a bulk carrier has died and three others injured after their ship was hit by a large wave several hundred miles off the coast of Nova Scotia on Saturday.

The Malta-flagged MV Giulia 1 was about 320 nautical miles southeast of Nova Scotia when it was hit by the wave.

Following the incident, the vessel sailed for Halifax where it arrived on Jan. 31.

The incident comes as NOAA’s Ocean Prediction Center was tracking a strong low pressure system off the northeast coast of the U.S. that was forecasted to produce significant wave heights up to 52 feet.

Transport Canada is reportedly investigating the incident, including whether or not it was in compliance with Maritime Labour Convention obligations.