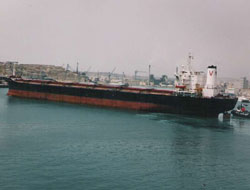 THE managing director of major Thai based hanysize bulker owner Precious shipping says that dry bulk demand will come ?roaring back? after a couple of months or so.

In a press statement Khalid Hashim has outlined his views on why the Baltic Dry Index has bombed so dramatically and why he believes there will be strong recovery. The following are quotes from the press statement:

?Two back-to-back Non Deal Road Shows and one Major Shipping Conference later (spread over the UK, Europe, Singapore and Hong Kong), I am left with the distinct impression that a lot of people are not yet aware of the real reasons behind the dramatic and unmitigated fall in the Baltic Dry Index (BDI)''.

?The last time that we saw the BDI fall below 1,000 points and continue in a southerly direction and reach its lowest level of 554 points was in July 1986. At that time it was the mountain of new supply of ships entering the freight markets that had led the BDI to reach its lowest levels ever. This time around the avalanche of new ships has not yet arrived, and may be permanently delayed due to the critical lack of funding due to the worst-ever financial crisis being faced by all banks all around the world, and yet the BDI is sinking towards these historically low landmarks. The underlying demand for cargoes is still very strong as the fundamental drivers of an increasing population; rapid wealth creation; changing eating habits; rapid urbanization and infrastructure growth are all still very much in place and remain resilient and undaunted by the current financial crisis dominating the world news papers and television channels. The financial crisis may have dampened these factors for a while but please bear in mind that it can not hold them back for long or forever''.

?What I was able to gather at my recent meetings as the main reasons people gave for the collapse of the BDI could be summarized as follows:

- The Chinese are not buying any Iron Ore at present.

- The Olympics and the Para Olympics were the reason behind the stoppage/slow down of Chinese Iron Ore imports.

- The Chinese were on their Golden Week Holidays and on return have not as yet resumed their business-as-usual activities.

- The financial crisis was slowing down global activity and that was leading to a loss of cargoes.

?Whilst most of the above common perceptions may be accurate to a degree they cannot explain the fact that the BDI has, since the 20th May 2008, lost more than 86% of its value by the 15th October i.e. in less than 5 months time we have seen an absolute collapse in this index from a high point of 11,793 points to the current 1,615 points.

?One common misconception that I would like to bust at this stage is the slowing down/lack of Chinese iron ore imports. As per preliminary trade data available, China"s iron ore imports totalled 39.2m tonnes in September, a year-on-year rise of 6m tonnes. This represents only the third time monthly imports have been above 39m tonnes and occurred despite persistently high stockpiles at China"s ports. Year-to-date imports of 346.5m tonnes are 22% up on the same period in 2007.

?So if it is not iron ore imports, then what is the culprit behind the collapse of the BDI?

?The recent article in Bloomberg date lined the 14th October 2008 attributed to me covered an anecdotal piece of evidence that I had conveyed at the Marine Money conference at Singapore covering the poor experience that one of our clients had had with a Letter of Credit (L/C) encashment with a leading bank in Dubai. The client confirmed that despite having all the required pieces of paper to encash the valid L/C he was told by the bank that they simply did not have funds to pay him!!

?Since then I have had trade colleagues and others involved in shipping stating that they are hearing of L/Cs being cancelled or recalled in Australia, Indonesia and other places. We have heard that American Banks are not accepting L/Cs from banks that they are not comfortable with as a result exports out of the USA are falling very quickly and exacerbating the already perilous flow of cargoes. ?Please however bear in mind that anecdotal evidence by its very nature is very hard to track down or verify but the fact that the BDI continues to drop, despite conventional wisdom suggesting that there would be a sharp bounce back as soon as the end of next month, makes me think that trade disruptions are more the norm than the exception but this fact has largely not as yet been picked up by the people who can, and should, rectify this situation.
?Having said all of the above I also think that such situations take time to reverse and normalise so I am expecting at least a couple of months of this disruption to continue before trade finance and cargo flows get back to more normalised levels. In the meantime real demand for cargoes is simply being converted to potential or latent demand so long as the trade credit cycles do not normalize. As and when they do normalize, you should expect demand to come roaring back with potential and latent demand translating into real demand and a plethora of real cargoes.?

This news is a total 692 time has been read