Bulk Carrier in Distress Off Newfoundland 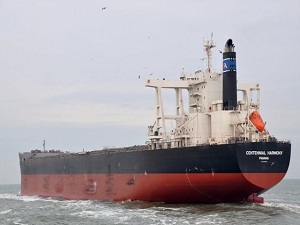 The Canadian Coast Guard responded to a vessel in distress off the coast of Newfoundland and Labrador on Thursday following a report that it was taking on water and losing power.

The Coast Guard said it received a distress call from the Panama-flagged M/V Centennial Harmony reporting that it was in need of assistance approximately 90 nautical miles from the Hibernia offshore oil platform off the coast of St. John’s.

The Coast Guard tasked the CCGS Grenfell while the JRCC sent vessels and assets to assistance. By the time rescue crews arrived, the crew of the Centennial Harmony notified that they were no longer in need of assistance after power to the vessel was restored and the situation stabilized. The Coast Guard said the incident posed no risks to the Hibernia platform.

AIS ship tracking data indicates the vessel is sailing from Canada to the UK. Earlier this week, the U.S. National Weather Service was forecasting that a hurricane force storm was expected to move eastward across the west-central North Atlantic with storm to hurricane force winds and significant wave heights building up to an astounding 19 meters (over 60 feet).

This news is a total 3469 time has been read
Tags: bulk carrier, newfoundland, labrador, canada, distress Georgian Sailors Freed After Piracy Incident in Gulf of GuineaNine Georgian sailors are reportedly on their way home after having been kidnapped by pirates in the waters off Nigeria. This is just one of the growing number of piracy incidents in the Gulf of Guinea.
FRONT ROW
1/20
PHOTO GALLERY
12345678
TOP NEWS
YESTERDAY| THIS WEEK |THIS MONTH
AUTHORS
12
Video Gallery
12345678
All Rights Reserved © 2006 TURKISH MARITIME | İzinsiz ve kaynak gösterilmeden yayınlanamaz.
Phone : 0090 212 293 75 48 | Fax : 0090 212 293 75 49 |