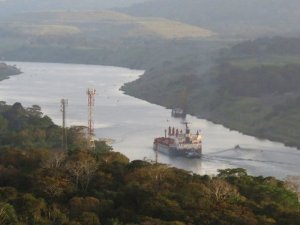 A Cypriot-flagged bulker named the Bluebill collided with a railway bridge over the Chagres River in the Panama Canal.

Dramatic video of the accident and its aftermath shows significant damage to the bridge used by the Panama Railway to reach the Gamboa community and along the route between Panama City and Colon.

The 37,000 DWT bulk carrier was transiting the Panama Canal on a voyage from Korea. The circumstances leading up to the collision are currently under investigation, and the vessel remains in the area of the accident. The extent of damage to the vessel and any potential injuries to its crew are yet to be announced.

The Panama Canal Authority said it would be participating in the investigation into the accident, but noted that traffic was proceeding through the Panama Canal normally. However, the Panama Railroad said that its service would be interrupted for 15 days.

This news is a total 1527 time has been read
Tags: Bulker Damages Railroad Bridge in the Panama Canal