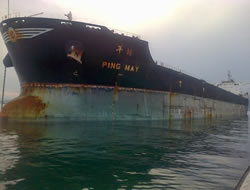 The Colombian Navy has seized 39.8 kilograms of cocaine found aboard the Liberian-flagged bulk carrier Ping May, the Navy informed.
Coast Guard Station Santa Marta and CTI personnel conducted the inspection of the vessel which was anchored in the sector Swamp – Magdalena. They found two bags with 40 packages containing drugs located in the chain locker. CTI staff Magdalena confirmed the found materials were positive for 39.8 kilograms of cocaine hydrochloride.
The 2010-built bulk carrier “Ping May” arrived in Colombia from England and was heading to the port of Rotterdam, the Netherlands.
This is the fifth foreign cargo ship confirmed to have been contaminated with alkaloids in the port of Santa Marta.
So far this year the Navy seized over 28 tons of cocaine in the Colombian Caribbean.
http://turkishmaritime.com.tr
This news is a total 4647 time has been read