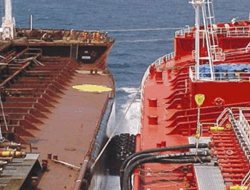 Some of Singapore's bunker suppliers have raised concerns over plans to require the use of mass flow meters for bunkering at the port, saying the technology is expensive and it could drive up bunker prices, industry news site Seatrade Global reports.

One supplier, who wished to remain anonymous, acknowledged the use of mass flow meters increased accuracy when measuring the volume of delivered fuel, but said ship operators may not trust their results."The issue is not about the accuracy of the equipment but the acceptance (of the flow meter results) by shipowners," the supplier said."It makes no sense when an equipment is mandatory but the result isn't.

"The suppler also questioned what would happen if a bunker buyer claimed a shortfall."Will MPA ask suppliers to settle themselves because it is a 'commercial decision'? If it is a 'commercial decision', why do suppliers need to install something that can cost $300,000? This is the major concern of almost all the suppliers," they said.The Maritime and Port Authority of Singapore (MPA) confirmed to Ship & Bunker in September that it plans to make use of the meters mandatory, but it has not yet said when the rule will go into effect.

Another supplier was quoted as saying that in order for ship operators to accept the flow meter results it would be necessary to educate them before mandating any new regulation."We are going to follow this procedure," they said. "It is a process that has to come but implementing it within the next one year will not be possible. There are positives and negatives for Singapore and we will have to see how it goes."Singapore-based bunker suppliers were also reported to have accepted that more accurate measurements from mass flow meters would result in an increase in bunker prices at the port, as it would eliminate any cost offset that could be made through short deliveries.

Although it is not clear exactly how much prices would go up, suppliers have said it could be enough to potentially push shipowners to other regional ports such as Shanghai or Shenzhen in China.ExxonMobil is one supplier embracing the technology in Singapore, saying it is "bringing bunkering into the 21st century" and can also save significant time when bunkering.

This news is a total 1514 time has been read