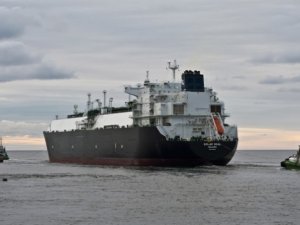 Liquid Natural Gas carriers are addressing a less volatile short-term charter market than that experienced by crude carriers, “sister ships” in an adjacent energy sector during the recent Covid-19 pandemic.

That’s largely due to major differences in how the commodities are traded, transported and consumed, according to analysts and industry experts.

The different LNG/crude oil market dynamics have been playing out in their respective waterborne-transport sectors since producers of both feedstocks, about six weeks ago, began flooding markets. The excess output resulted from the Covid-19 induced-demand downturn.

Most LNG is purchased under long-term, “take or pay” contracts that allow shippers to defer delivery, usually within the 12-month contract term, under an “annual contract quantity” clause.

To defer delivery, consignees must give the carrier at least 60 days advance notice, as required in LNG carrier fixed-price, long-term time charters. Those charters, twinned with the “take or pay” contracts, govern the employment of most of the 504 or so LNG ships operating worldwide.

And those purchase contracts likely haven’t been breached, said Thomas Burgess, a co-founder of Pointe LNG.

Pointe LNG is a LNG supercooling/marine transfer facility being developed in Pointe a la Hache, LA, about 50 miles south of New Orleans.

Under LNG-fixed rate (carriage) contracts, “customers pay full hire (fees) to Teekay LNG regardless of their usage of the vessel,” Teekay reported.

And most of the Teekay fleet enjoys such rate protection. In fact, Teekay, in an April 3 press release, noted that “our fleet is 98 percent fixed (chartered) through 2020 and 94 percent fixed in 2021.”

The upshot: Teekay maintains it “is not impacted by LNG prices or structural or global imbalances of LNG.”

However, contractual shipping commitments are not stopping LNG charterers from canceling voyages from the US Gulf Coast to western Europe given the recent, sharp demand drop off. The number of weekly sailings declined in April on this route by about 12.5 percent, from an average of 16 to 14, representing about eight lost cargoes, said Jefferson Clarke, a Poten & Partners analyst based in Houston.

He is one of several analysts from Poten, a New York-based consultant, who spoke during a series of company webcasts earlier this month.

And LNG charterers have canceled at least 25 cargo shipments, in both May and June, from the US Gulf coast to western Europe, said Houston-based Jason Feer, head of Poten’s Global Business Intelligence unit

Those “cancelations and deferrals in the US have been able to keep the (overall) market functioning,” Feer said Wednesday.

Moreover, additional shipments of US Gulf to western Europe cargoes will be canceled through September, Feer added.

“Europe is the market of last resort for cheap (LNG) gas,” he said.

Scheduled inbound shipments, destined for the important European trading/storage hub in Rotterdam, won’t tax holding tanks there for at least a month or two, said Kristen Holmquist, a Poten analyst, based in Houston.

That’s because many major European facilities, like those in Rotterdam, have large, land-based tanks built to stockpile surplus LNG for the high season (fall and winter) demand surges that begin to kick in the late September.

However, “Europe is heading into the storage-building season with record storage levels” due, in part, to the recent warm winter that crimped peak season demand, thereby increasing residual supply, she said.

The spot market rate for a LNG carrier is about $45,000 per day, consistent with fees paid during the past two spring seasons, Teekay reported earlier this month.

There are at least two factors driving the large disparity in the volatility of rates to charter crude oil tankers and LNG carriers:

A much larger percentage of crude oil than LNG is traded on the spot market, under short-futures contracts that require physical delivery upon expiration.

The result: LNG land-based storage terminals now can offer modest excess capacity because inventory levels are down due to the seasonal (spring and summer) demand drop off from prime utility customers in both northwest Europe and the US.

LNG is largely used for home heating in the major European import markets, specifically France, Spain and the United Kingdom.

Given recent and projected shipment deferrals and cancelations, LNG ship charterers now are determining how to best deploy vessels that they control, in the face of slackening demand.

An option is to sub-charter the vessels to brokers and aggregators who can deploy the ships when trading excess cargo on the LNG spot market.

Deferred or canceled European-bound export shipments this month from such LNG suppliers as Cheniere facilities in Sabine Pass and Corpus Christi, TX, as well as competing Freeport (TX) LNG and Cameron LNG, located in southwest Louisiana, could be candidates for spot market trading.

Worldwide LNG export demand in 2020 will drop by about 20 percent to 350 million metric tons from 2019 levels, Poten estimates.

However, in a case of bad timing, LNG carriers in the next several months are scheduled to take delivery of 37 new vessels, Poten’s Clarke said. Operators ordered these vessels several years ago, in response to strong LNG shipping demand projections.

The current LNG fleet totals about 504 ships, most chartered. More specifically, a total of 463 of these ships operate under long-term time charters and 41 are under contract for about six months, Clarke said.

A handful of LNG vessels have no current charter commitments, he added.

Most of the demand fall-off for imported LNG this year will come in western Europe and India. Shipments will decline only modestly this year to Japan and China, given weak 2019 demand, Poten estimates.

Reacting to recent market softness, US LNG producers are planning to cut output because these “exports are out of the money (not profitable) in the near term,” Holmquist said.

The reason: high shipping cost for US to Europe LNG cargoes, given the greater distance these shipments must travel than those supplied by “nearby” European and African producers and high supercooling/liquefaction cost at the load port.

Western European utilities are prime users of waterborne exported US Gulf coast LNG. Other major customers are in India, Japan and South Korea, according to Energy Information Administration annual data.

A two-week economic lockdown in early April in India that severely crimped demand in this important spot market resulted in additional export cargoes being diverted to an already oversupplied European hub in Rotterdam, said Oleg Vukmanovic, a Poten analyst based in London.

This further weakened an already soft market, whose storage capacity now is strained, he said.

“The LNG wave continues to crash on Europe’s shore. LNG arrivals (in western Europe) continued to quicken after the India (economy) locked down” (in early April in response to the Covid-19 pandemic), Vukmanovic said.

This news is a total 446 time has been read
Tags: coronavirus, lng carriers, tankers