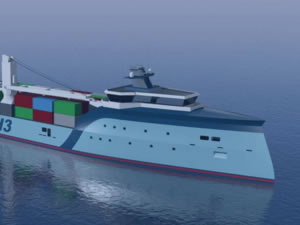 C-Job Naval Architects based in the Netherlands announced it has joined the Ammonia Energy Association, strengthening its commitment to research ammonia as a renewable fuel for the maritime industry.

C-Job Naval Architects based in the Netherlands announced it has joined the Ammonia Energy Association, strengthening its commitment to research ammonia as a renewable fuel for the maritime industry.

With the International Maritime Organization announcing its plans to reduce and eventually fully eliminate ship emissions, it is of the utmost importance that the global maritime industry looks into renewable fuels. C-Job said it has identified Hydrogen Based Renewables (HBR) as the best solution and sees ammonia (NH3) as a high potential.

Niels de Vries, Naval Architect at C-Job, said "We are committed to further research ammonia’s potential and have the ambition to realize a safe and efficient ammonia fueled vessel."

"We’re excited to be part of the Ammonia Energy Association whose views on the future of renewable fuels in the maritime industry match the vision of C-Job," de Vries said. "As a member we look forward to further intensify our collaboration with other industries to realize our ambition."

C-Job has been researching the viability of ammonia as ship’s fuel for the past few years, and it said the results look promising. Ammonia can be created by using the periodic overcapacity of other renewable energy sources such as wind and solar power. Due to ammonia’s long history in the fertilizer industry, it is an easily sourced material with established safe working practices. These safe working practices are crucial first steps to further implement ammonia as a fuel in the maritime sector.

"We think that ammonia could be a viable and promising option for a clean and sustainable fuel," de Vries said. "C-Job has a strong track-record of using the latest technologies to design sustainable and future-proof vessels – an ammonia-powered ammonia carrier free of harmful emissions, is just one example of what the future might hold."

Later this year C-Job will participate in the 15th annual NH3 Fuel Conference starting on October 31, in Pittsburgh, Pa., where during the second day C-Job will be part of the maritime panel to discuss challenges of implementation of ammonia as a fuel, the readiness of ammonia engine technologies, and the near-term opportunities for pilot projects and demonstrations.

This news is a total 1177 time has been read
Tags: C-Job Researching Ammonia as Marine Fuel