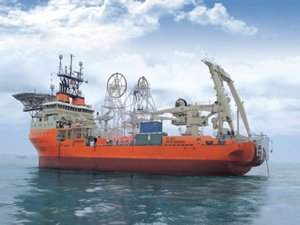 A South Korean cable layer sank in the East China Sea over the weekend after suffering a fire on board.

Korean media reports the 6,204-tonne Responder suffered a fire at approximately 3:50 a.m. September 11 as the ship was laying cable around 31 nautical miles off Tongyeong, South Korea.

The ship began to sink Saturday afternoon after several hours of firefighting and sank completely at 5:42 p.m., Yonhap News reported.

All 60 crew member on board the cable layer were rescued by a nearby tugboat before the ship began sinking.

The Korean-registered Responder is operated by KT Submarine. “We are going to discuss the salvage method after precautions to prevent marine pollution,” the company said in a statement reported by Yonhap.

Oil spill risk from the vessel is considered to be low, the report said.

This news is a total 3403 time has been read
Tags: KT Submarine , South Korea , Fire and Sinks