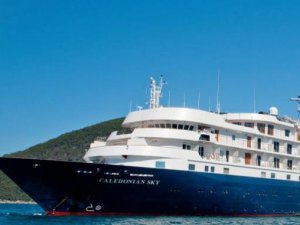 Expedition vessel MS Caledonian Sky has been refloated after it ran aground on a reef off Indonesia on March 4, the ship’s owner, the UK-based cruise company Noble Caledonia, informed.

The company said that the 1991-built passenger ship was operating off Kri Island in a remote area of Indonesia when it grounded.

After the relevant authorities were informed, the divers inspected the underwater part of the hull, confirming that the ship was not taking on water and that there was no pollution as a result of the incident.

At the time, Caledonian Sky was carrying 102 passengers and 79 crew members. The ship was not evacuated, although its lifeboats were lowered into the water to lighten the vessel aft while it was aground.

After it was refloated on the next high tide, the 90-meter-long vessel was anchored nearby so that a full assessment of the hull and machinery could be undertaken.

A Noble Caledonia spokesman said that the company “is firmly committed to the protection of the environment and as such deeply regrets any damage caused to the reef.”

The spokesman added that Noble Caledonia’s insurers will be working with the Indonesian Government, local officials and environmental specialists to come to an agreement in relation to the damage done to the reef.

In addition, Noble Caledonia said that it has established a fund with the aim of helping the local population and contributing to the repair of the reef.

This news is a total 1015 time has been read
Tags: Caledonian Sky Refloated after Grounding on Indonesian Reef