Call for oil price by Gazprom 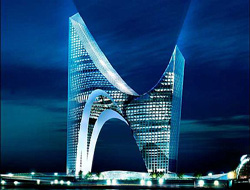 ''The oil price can't drop down substantially, at least through the policies of OPEC countries,'' Medvedev said.

''We do hope the measures taken both in Europe and the U.S. will not allow the economy to freeze.''

State-run Gazprom's revenues depend on natural-gas exports to Europe, where prices are pegged to the oil market. Since June, when Chief Executive Officer Alexei Miller predicted a barrel of crude could soon cost $250, the price of oil has plummeted below $100 on fears the liquidity crisis could lead to a global economic slowdown.

Even as unprecedented energy prices mean Gazprom will reap ''record revenues'' this year, Medvedev said, the company expects the gas price to drop over the next six to nine months because of a time-lag with oil.

Tightening credit markets and lower revenue expectations have already caused the company to review its spending program, he said.

''Even at this level of prices the majority of our projects are in the black, not the red.''

At the same time, since Gazprom has long-term contracts with European consumers on a ``take-or-pay'' basis, the company will be largely insulated against a drop in demand resulting from an economic downturn, he said.

''We should not forget that we are not in a bubble business, we're in a real business requiring huge investment,'' Medvedev said.

''I'm rather sure this crisis will help regulators understand that this isn't the right time to joke with infrastructure projects.''

The European Union has threatened to restrict Gazprom's access to its internal energy market, and Scandinavian environmental regulators have delayed construction of the Nord Stream gas pipeline linking Russia directly to Germany under the Baltic Sea.

Medvedev denied that Russia's August invasion of Georgia hurt Gazprom's expansion plans in Europe and North America. The company agreed on an asset swap with Germany's E.ON last week after years of negotiation. And Gazprom will meet with BP Plc and ConocoPhillips, which plan to build a gas pipeline linking Alaska to the continental U.S., ''in the near future,'' he said.

Following talks on gas deliveries last week between Russian Prime Minister Vladimir Putin and his Ukrainian counterpart Yulia Timoshenko last week, ''the door is open to finalize the supply structure for the next three years,'' he said. ''In terms of European supply there's absolutely no danger.''

This news is a total 1819 time has been read