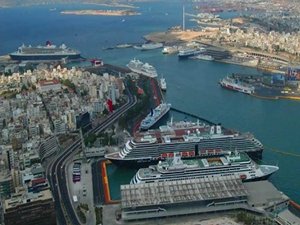 The Greek cruise ship association is reportedly concerned that opening the ports might create further bad feelings to the cruise industry especially if the number of cases of the virus continues to rise in Greece.

Faced with new spikes in outbreaks of the COVID-19 virus there are reports that Greece might change its recent decision to permit cruises to resume.

The Greek cruise ship association is reportedly concerned that opening the ports might create further bad feelings to the cruise industry especially if the number of cases of the virus continues to rise in Greece. The Greek media outlet Kathimerini is reporting that in a statement on Monday, August 17 the association expressed concern over potentially premature efforts to resume tourism that might cause longer-term harm to the industry. Kathimerini reports that the association would accept a ban on cruising for the remainder of the current tourism season.

The change in sentiment comes after the Greek Government announced last week a further rise in COVID-19 cases bringing the total to more than 7,000. Over 1,600 of the cases are traced to international travel. There are also 3,000 cases traced to community transmission.

Responding to the latest case numbers, Greece again cautioned its citizen to follow the standard guidelines and personal responsibility. They urged the use of face coverings especially in areas that are seeing new outbreaks of the virus and for people returning from travel. Measures were also implemented in some of the areas with specific clusters including limiting public gatherings and indoor events where special protective measures are not in place. Civil servants were also ordered to work from home. The authorities are also planning randomized testing on travelers returning to Athens and passing through Greece’s main port of Piraeus.

Recently Greece had announced that it would reopen six of its primary cruise ports. This included Piraeus, Rhodes, Iraklion, Volos, Corfu, and Katakolon, which would be essential to the restoration of cruises. The country’s tourism minister had sought to send out the message that Greece wanted tourists to return for the fall of 2020.

A number of the major cruise lines immediately responded announcing that they were including Greece in their cruise plans. MSC Cruises, which resumed operations this week from Genoa, Italy, will also resume cruising on August 29 from Bari, Italy on the MSC Magnifica sailing 7-night cruises in the Eastern Mediterranean to Corfu, Katakolon (Olympia), and Piraeus (Athens) in Greece. Future sailings will also embark passengers in Trieste, Italy. Costa Cruises plans to resume sailing from Trieste in September, but said it would initially limit its trips to Italian ports. The German company TUI Cruises was also planning to resume operations in the Mediterranean in September basing its ship Mein Schiff 6 in Corfu for cruises to Piraeus and Crete. AIDA was also reported exploring cruises in the Mediterranean. Celestyal Cruises the main Greek cruise operation however said it did not plan to resume operations till 2021.

Currently, it is just speculation that Greece might close the cruise ports. The increased COVID-19 restrictions are in place until the end of August in hopes that it would prevent further community spread from the current cases. If Greece closes its ports it would be a setback for the cruise industry that has taken its first tentative steps at resuming operations.

This news is a total 2627 time has been read
Tags: Calls for Greece to Reconsider Cruise Permission Due to COVID-19 Cases