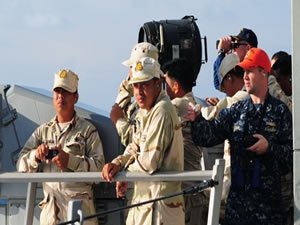 Contractors have demolished a U.S.-built facility at Cambodia's Ream Naval Base, adding further impetus to reports that the Cambodian government has struck a deal with China for the refurbishment and use of the site.

According to the Center for Strategic and International Studies, the building was the former Tactical Headquarters of Cambodia's National Committee for Maritime Security. The building had been repaired and re-equipped by the United States and Australia as part of a foreign assistance package in 2012. An adjacent American-built RIB launch and repair facility has not been demolished.

CSIS noted that Chinese firms have leased extensive areas around Ream for purposes of developing a landfill, and that dredging and land reclamation activity is under way.

Access to Ream would give China a base on the Gulf of Thailand, near the shipping lanes to and from the east side of the Straits of Singapore and Malacca. The site is also within reach of disputed maritime claims in the South China Sea.

According to the Wall Street Journal, U.S. officials have seen an early draft of an agreement between Cambodia and China on the future use of the base. The deal would purportedly allow Chinese forces to use the site for a period of 30 years, with automatic renewal thereafter.

Cambodian dictator Hun Sen has denied the claim, noting that such an agreement would be illegal under Cambodia's constitution. Hun Sen, whose full title translates as Lord Prime Minister and Supreme Military Commander, has served in his role (and related positions) for 35 years; Though Cambodia is a democratic nation, Hun Sen's party holds all parliamentary seats, and the main opposition party has been banned since 2017. Like North Korea, Hun Sen's  regime is considered one of China's closest regional allies, and China is its largest investor and trading partner.

The naval base is not the only new facility in Cambodia attracting Western attention. Chinese contractors are also building a major international airport on a remote peninsula across the bay from Ream Naval Base. The civilian airfield will have Cambodia's longest paved runway.

“We are concerned that the runway and port facilities at Dara Sakor are being constructed on a scale that would be useful for military purposes and which greatly exceed current and projected infrastructure needs for commercial activity,” Pentagon spokesman Lt. Col. Dave Eastburn told the New York Times in a statement. “Any steps by the Cambodian government to invite a foreign military presence would disturb peace and stability in Southeast Asia.”

This news is a total 1819 time has been read
Tags: Cambodia-China Deal Suspected in Razing of U.S.-Built Naval Center