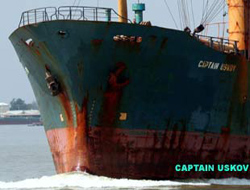 Russia's transport ministry reports that a missing Russian-operated cargo vessel, the CAPTAIN USKOV has still not been located.

The 3155 grt vessel left the Russian port of Nakhodka on the 15th and was due in Hong Kong on the 24th, but failed to arrive. Last radio contact is said to have been as long ago as the 20th. A search is being conducted in the East China Sea, with assistance from China, Japan and shipping in the region.

Japan sent out a plane to scan the area where the ship's last location was reported, unfortunately there was no trace of the vessel.

The Ministry says that other vessels, including the mv VLADIVOSTOK, mv CAPTAIN LYUBCHENKO and the mv TRADER have been asked to follow the route taken by the CAPTAIN USKOV

The ship is an elderly general cargo vessel built in Japan in 1982 and flies the Cambodian flag. Records indicate she was bought by her current owners Alazara Navigation of St Kitts & Nevis, with ship managers Hermes Co Ltd of Sovgavan in 2007 and was formerly the mv FINE, operated by Erico Shipping Co Ltd.

On board are seventeen seafarers, all Russian citizens.

The vessel was detained last year on the 8th October at Vostochny with 13 deficiencies, three of which were related to safety of navigation. However the detainable deficiencies were fire safety related. On the 16th November, her last inspection at Nakhodka threw up two deficiencies, one of which concerned her propulsion and auxiliary machinery. Authorities say all deficiencies were rectified before she sailed from the port.

Meanwhile news agency ITAR TASS reports Nikolai Sukhanov, chairman of the Far Eastern branch of the Russian Trade Union Seamen, has voiced fears the ship could have been the target of pirates.

The vessel's crew age between 21 and 52, he said. The 96.8 metre vessel is said to be carrying a cargo of steel coils, which is at variance with her normally reported cargos of timber.

This news is a total 1518 time has been read