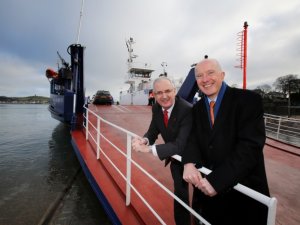 The contract will see the firm constructing a new car and passenger ferry to replace the existing MV Strangford operating between Strangford and Portaferry in County Down, Northern Ireland. The new ferry is due to be delivered by August 2016.

The new ferry will have capacity for 28 cars and 260 passengers and will share the ferry operation on a rotational basis with the MV Portaferry II. This will provide improved capacity and remove the need for a 7.5 tonne weight restriction that is in place when the MV Strangford is in service.

Transport Minister Danny Kennedy said: ”The Department for Regional Development currently operates a vehicle ferry service in Strangford Lough between Strangford and Portaferry with two vehicle ferries and a back-up passenger ferry. The new ferry will replace the existing MV Strangford which is over 40 years old and is approaching the end of its economically operational life.”
The Department has engaged with a range of stakeholders, including the public, the Committee for Regional Development and local councils during the development of the ferry proposals. A representative of the Department confirmed that the project team will continue to keep stakeholders informed during the construction of the new ferry.

The Minister added that good progress was also being made on the tender process for a new ferry for Rathlin. Tender documents have been issued to a shortlist of ship builders and they hope to award the contract in April.