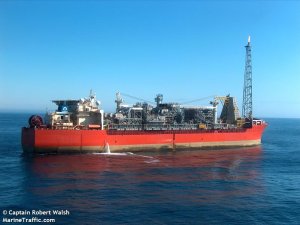 The Canada-Newfoundland and Labrador Offshore Petroleum Board (C-NLOPB) has suspended petroleum-related operations conducted by the SeaRose Floating, Production, Storage and Offloading (FPSO) vessel due to an incident on March 29, 2017

when an iceberg entered the 0.25 nautical mile Ice Exclusion Area of the SeaRose FPSO. The SeaRose FPSO is located in the White Rose Field, approximately 350 km east of St. John’s.

By Kevin Orland (Bloomberg) — Husky Energy Inc. suspended operations on its SeaRose vessel, which gathers crude from its offshore fields in the Atlantic, after regulators reprimanded the company for a close call with an iceberg last year.

An iceberg came with a quarter of a nautical mile of SeaRose on March 29, when it was laden with 340,000 barrels of crude and 84 workers, according to the Canada-Newfoundland and Labrador Offshore Petroleum Board. The board concluded that Husky has “serious issues” with its ice-management systems and organizational decision-making, and the company won’t be permitted to resume operations on the vessel until the body is confident the problems have been addressed.

Husky, the Calgary-based oil company controlled by Hong Kong billionaire Li Ka-Shing, said it will take all necessary steps to comply with the board’s order. The SeaRose floating production, storage and offloading vessel accounts for about 27,000 barrels of output a day.

“We could have and should have responded differently according to the pre-existing plan, and we will learn from this incident,” Chief Executive Officer Rob Peabody said in a statement.

Husky shares rose 0.6 percent to C$19.06 in Toronto in Wednesday’s regular trading, before trading in the stock was halted for the announcement. Husky has gained 7.4 percent this year, topping the 1.3 percent advance of the S&P/TSX energy index.

This news is a total 732 time has been read
Tags: Canada Suspends Huskey FPSO Operations Following Close-Call with Iceberg