Canadian Navy To Buy a Sub Hunter Against Russia 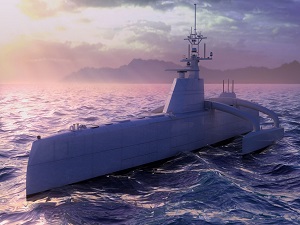 The Royal Canadian Navy is moving toward Britain’s Type 26 frigate design, a multimission ship designed to cut through the water quietly, hunt submarines, and defend against hostile missiles and aircraft.

The Canadian government announced mid-October that a team led by Lockheed Martin Canada had been selected as the “preferred designer.” That team was offering up British defense firm BAE Systems’ Type 26 design.

To some, the selection of the Type 26 design was a surprise given that Britain only just began cutting steel for the first one last summer, and as with any new ship and design, there is a high potential for cost overruns and delays.

But the Arctic nation’s selection of a ship that is a purpose-built sub hunter could be a sign that it is willing to accept those risks because of the strategic threat Russia poses to Canada’s interests at the rapidly thawing top of the world. “For the Canadians, anti-submarine warfare is a big deal,” said Bryan Clark, a retired U.S. submarine officer and analyst with the Center for Strategic and Budgetary Assessments. “If you are worried about the Russian sub threat and the air threat, then, yeah, the Type 26 makes sense.”

Indeed, BAE executives here said a big part of Type 26 is its anti-submarine warfare-friendly design elements. “That was a huge discriminator for us,” Anne Healey, a vice president with BAE Systems, told a roundtable of reporters at the Euronaval conference. “We are extremely quiet and we are probably the world’s most advanced frigate … and that’s a key element of what sets us apart and what’s valued by the Canadian Navy.”

The ASW features were also a big factor for Australia, which is locked in a standoff with China over its actions in the South and East China seas, vital sea lanes for the Pacific nation. The shift toward ASW is part of an industry trend, said Gary Fudge, a vice president with Lockheed Martin Canada.

“The number of submarines produced in the 15 years is phenomenal, and now the world has woken up and it doesn’t have the same ASW capability anymore and it hasn’t kept pace with the anti-air warfare technology. So Canada is very interested in getting back on track.”

All told, Canada wants to buy up to 15 frigates with a notional total program cost of $60 billion all in. And while the selection of Lockheed and BAE is a big win for the companies, the project could still fall through as the program enters an evaluation phase where Lockheed’s bid will be examined, and Canada’s requirements will be reviewed to ensure that Type 26 is the best bet.

The final decision should come some time over the winter, according to a report by the Canadian Broadcast Corporation. But assuming the contract moves forward, it would mean three of the “Five Eyes” countries — the United Kingdom, Australia and Canada — will operate Type 26 frigates. (The United States — which passed on the Type 26 design during its frigate competition — and New Zealand are the other two counties in the intelligence sharing pact.)

Clark, the CSBA analyst, said the selection of Type 26 was in some ways surprising because of the potential for cost overruns. “It’s not yet a proven ship, and you are taking a ship that is not even built yet and making it the basis of your frigate program,” Clark said. “It is a little surprising, especially for a country that might lack the wherewithal and the funding for potential cost and schedule overruns.”

But BAE thinks Canada will be in good shape because the British and Australian programs are underway, meaning Canada should be able to avoid early mistakes through shared lessons learned. Furthermore, not much in the way of design changes were needed to meet the Canadian requirement.

“The amount of design change that we are doing is only 10 percent, so it’s going to represent a very low risk in terms of the alterations that are being made,” Healey said. By way of comparison, the U.S. Navy had to change about 40 percent of the design of its DDG Flight IIA to incorporate the new SPY-6 radar in Flight III.