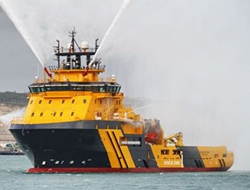 Sweden's Viking Supply Ships (VSS) have opened an office in St. Johns, Newfoundland, Canada.
They say they have had several vessels working in Canada over the past few years and the opening of the Canadian office will strengthen their strategic position in the Canadian market.
Mr. Gerard Dunphy, who has been in the Offshore Business for over 20 years in Atlantic Canada, the Canadian Arctic, Alaska, Greenland and the North Sea, has been employed as the Managing Director.
The company's parent, Rederi AB TransAtlantic is a leading Swedish shipping company with headquarters in Gothenburg, Sweden and additional offices in Europe. They inform it is organized into two business areas Industrial Shipping and Viking Supply Ships. The Group says it has about 900 employees and the turnover in 2012 was MSEK 3,274.
www.turkishmaritime.com.tr
This news is a total 1601 time has been read