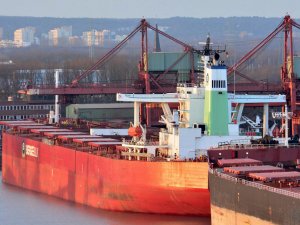 The overall index, which factors in rates for capesize, panamax, supramax and handysize shipping vessels that ferry dry bulk commodities, shed 14 points, or 1.23 percent, to 1,125 points, the lowest since Aug. 10, 2017.

For the week, the index ended 12 percent lower.

It fell about 35 percent this week, its biggest weekly percentage decline since Jan. 15, 2016.

"Capesize rates are under pressure yet again as weak fixture levels in the Far East continue to drive average earnings lower," Clarksons Platou Securities analysts said in a note.

Iron ore shipments account for around a third of seaborne volumes on the capesizes.

The panamax index snapped its seven-session long losing streak and rose 22 points, or 1.68 percent, to 1,333 points.

Among smaller vessels, the supramax index rose 1 point up to 911 points, while the handysize index climbed 4 points to 584 points.

This news is a total 1145 time has been read
Tags: Capesize Rates Post Biggest Weekly Drop in 2 Years