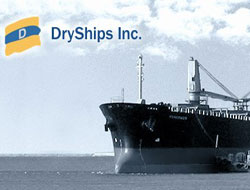 DryShips is likely to cancel a controversial purchase of nine capesize bulkers from his private fleet.

DryShips is likely to cancel a controversial purchase of nine capesize bulkers from his private fleet.

Shipowner George Economou has confirmed that his Nasdaq-listed dry bulk giant DryShips is likely to cancel a controversial purchase of nine capesize bulkers from his private fleet.

?I am not saying it depends only on one person,? Mr Economou told today. ?But in general under these conditions, it is good for any company to restrict capital expenditure and new debt. It is not the time to spend.?

He admitted that the matter was being discussed by the public company"s audit committee, comprising the three independent directors on DryShips" board.

When unveiled just two-and-a-half months ago, the $1.2bn capesize acquisition drew criticism from some quarters for the near-$130m price per unit agreed against the beginnings of a fall in bulker values, despite the fact that Mr Economou"s remuneration was entirely in stock.

In addition to issuing 19.4m new shares to its chairman and chief executive, however, the company faced shouldering $216m in bank debt on the ships and $262m in remaining installments for the five newbuildings among the nine.

The fleet at stake comprises one older capesize, three 2006-built vessels and five newbuildings for delivery in 2009 and 2010.

Possible cancellation was hinted at in a December 10 announcement, which said the company would ?seek to amend, wherever possible, the contracts regarding dry bulk acquisition and newbuilding commitments, potentially resulting in significant capital expenditure savings?.

However, the comment was largely overlooked as a policy statement as it was taken mainly to apply to the cancellation of four panamax newbuildings, two of which are still under construction, confirmed in the same statement.

Although analysts generally welcomed the move to ditch the acquisitions, some questioned whether the terms were punitive to the public company.

If the capesize cancellation, too, is confirmed, DryShips will almost certainly face a considerable charge for dumping the ships back in its boss" lap.

Mr Economou said ?the private side lost out by $100m? from the collapse of the panamax deal.

Asked how he could square his private interests with those of leading the public company when it came to unraveling such deals, Mr Economou said he expected to take a hit from the cancellation.

?If it"s good for one, then it is probably not so good for the other side. It is a question of compromise but I can take more losses on the private side,? Mr Economou said.

None of the newbuildings still to be delivered ? two from the panamax deal and five from the capesize transaction ? could be cancelled with the builders, he said.

With more than 30% of DryShips" stock, before the capesize deal, Mr Economou is the listed company"s largest stockholder.

?I stand to be more affected than anyone as far as DryShips is concerned,? he added.

This news is a total 525 time has been read