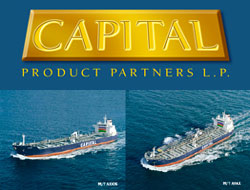 The Partnership's net income for the quarter ended June 30, 2009 was $8.0 million, or $0.32 per limited partnership unit, which is $0.03 less than the $0.35 per unit from the previous quarter ended March 31, 2009, and $0.19 lower than the second quarter last year. This drop compared to last year is primarily due to the absence of profit sharing revenues and higher interest expenses.

The product tanker spot market remained under severe pressure throughout the second quarter of 2009, as oil product demand continues to appear weak in each of the major OECD regions. U.S. refiners are increasingly able to satisfy domestic demand, the demand for imports of seaborne products globally has diminished and arbitrage opportunities are limited. The Suezmax spot market showed some resistance to the overall tanker market weakness due to increased demand for crude oil from Chinese and Indian refiners out of West Africa as well as from U.S. refiners in May in anticipation of the driving season. However, expectations for any substantial improvement in both the crude and product spot markets are currently low, which are increasingly reflected in the period and sales & purchase market.

Ioannis Lazaridis, Chief Executive Officer and Chief Financial Officer of Capital Product Partners' general partner, said: "Against the backdrop of the most depressed tanker spot market of the last ten years, our performance in the second quarter has been solid. The stability of our revenues is the result of our chartering strategy and the excellent operational performance of our vessels is evidenced by the absence of any material off hire for another quarter. As has been previously announced, we further lengthened the duration of our charters by swapping two of our vessels, Assos and Atrotos, for two of Capital Maritime's vessels, the Agamemnon II and Ayrton II."

As of June 30, 2009, the Partnership's long-term debt remained unchanged compared to the end of 2008 at $474.0 million and partners' equity was $164.1 million. The remaining undrawn amounts under the terms of our debt facilities currently stand at $246.0 million.

Mr. Lazaridis highlighted: "Due to a significant deterioration in the tanker market, the Partnership obtained an amendment to certain terms in its loan agreements effective until end June 2012. The lenders under both facilities have agreed to increase the fleet loan-to-value covenant to 80% from 72.5%. It was also agreed to amend the manner in which market valuations of our vessels are conducted. In exchange, the interest margin for both of our credit facilities will increase to 135-145 bps over LIBOR subject to the level of the asset covenants. Currently the margin on our $370.0 million credit facility is 75bps over LIBOR and on our $350.0 million credit facility it is 110bps over LIBOR. All other terms in both of our facilities remain unchanged."

On July 23, 2009 the Partnership held its Annual General Meeting in Piraeus at which Abel Rasterhoff was re-elected as a Class II Director until the 2012 Annual Meeting of Limited Partners. In addition, a proposal to amend the Company's First Amended and Restated Agreement of Limited Partnership so that, in the case of any meeting of Limited Partners of the Company which has been adjourned for a second time due to absence of a quorum during the first two meetings, the holders of any Outstanding Units of the class or classes for which such meeting has been called represented either in person or by proxy shall constitute a quorum for the purposes of such meeting, provided that such votes present at the third convened meeting represent at least 25% of the outstanding units of the Company, was approved by the majority of the outstanding common units of the Partnership. No other actions were taken at the meeting.

Mr. Lazaridis concluded: "The global economic and credit environment has seen little change over the last quarter and there are no visible prospects for a recovery. We continue to face a severe deterioration in the banking and credit world as well as a major global economic slowdown, whose duration is very difficult to forecast. The continuing weakness in the product and crude tanker market is widely acknowledged to have taken a substantial toll on both the period rates and asset prices but the limited transactions and fixtures taking place do not allow for a proper assessment of current market levels. The continuing poor state of the spot tanker market, the potential vessel deliveries for 2009 and the outlook for global oil demand in 2009, which remains weak (according to IEA -2.9% or -2.5 mb/d versus 2008), are all factors likely to have a further adverse effect on tanker vessel prices and period rates in the short- to medium- term. We have zero capital commitments to purchase or build vessels, we have amended a number of the terms in our loan facilities and our fleet's charter coverage for 2009 and 2010 stands at approximately 100% and 67%, respectively. However, the uncertain prospects for the rest of the year and the lack of tangible recovery signs for 2010 are all likely to have an adverse impact on our results and financial condition over time, particularly as vessels come up for rechartering."

This news is a total 987 time has been read