Captain of Doomed El Faro Thought He Could Avoid Hurricane, Investigation Board Hears 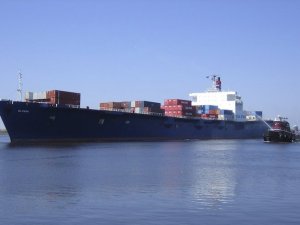 Captain Eric Bryson, who helped launch the El Faro on its final voyage, told the Coast Guard’s Marine Board of Investigation panel that the ship’s doomed captain had said he planned to “go out and shoot under,” meaning avoid, a storm brewing in the Caribbean.

He was among some two dozen experts set to testify during a second round of hearings on the worst cargo shipping disaster involving a U.S.-flagged vessel in more than three decades.

The 790-foot (241-meter) ship sank off the Bahamas during a hurricane on Oct. 1, two days after leaving Jacksonville before the storm intensified into a hurricane.

“There was nothing out of the ordinary,” said Captain James Fudaker, a docking pilot who also worked with the ship before it departed for Puerto Rico. He testified that he was not aware of equipment deficiencies.

Testimony from a former master of the ship also offered little insight into what went wrong.

“To me, the El Faro was a Cadillac. She rode well,” Captain Eric Axelsson told the panel, adding that he did not consider the vessel vulnerable.

During its first meeting in February, the Coast Guard panel heard the final phone call of the ship’s captain, Michael Davidson, a veteran mariner from Maine, who warned that the “clock was ticking” as his vessel took on water.

Executives with ship operator Tote Services have said the captain was responsible for decisions leading to the disaster.

The Coast Guard panel is looking for evidence of negligence or misconduct and the cause of the sinking. Convened only for the most serious disasters, the panel plans a third set of hearings at a yet unscheduled date.

By then, it hopes to have evidence from the ship’s voyage data recorder, which may contain detailed information from the vessel’s final hours. The recorder has been located in 15,000 feet (4,600 meters) of water off the Bahamas, but authorities have not been able to retrieve it.

Ultimately, the Coast Guard panel expects to issue a report and could make recommendations aimed at preventing another disaster. (Reporting by Letitia Stein; Editing by Paul Simao and Cynthia Osterman)

This news is a total 4265 time has been read
Tags: Captain of Doomed El Faro Thought He Could Avoid Hurricane, Investigation Board Hears