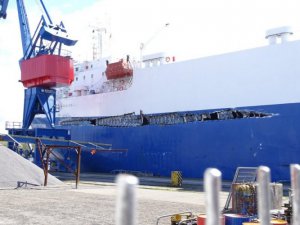 Car carrier City of Amsterdam and containership Conmar Bay collided in the Kiel Canal in the morning hours of April 22, according to a statement issued by German police.

The wind pushed the 800 CEU pure car carrier (PCC) to the opposite site of the crossing path where it collided with the 13,000 dwt boxship.

Based on the image, it can be seen that the hull of Nissan Motor Car Carrier’s ship suffered a breach of around 50 meters portside.

Although both vessels suffered damages, no one was injured, Police Department Neumünster said.

The 1999-built City of Amsterdam was towed to the Rendsburg Port, while the 2012-built Conmar Bay departed for the Port of Kiel.

The extent of the damages was expected to be determined after the inspection of the two ships.

This news is a total 819 time has been read
Tags: Car Carrier, Boxship Collide in Kiel Canal