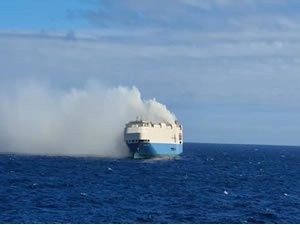 All 22 crew members of the M/V Felicity Ace abandoned ship safely and were picked up by a tanker after the car carrier caught fire approximately 90 nautical miles southwest from the island of Faial in the Azores on Wednesday morning.

A car carrier is abandoned and on fire in the North Atlantic near the Azores.

The Portuguese Navy has been responding with the rescue being coordinated by the Ponta Delgada Maritime Search and Rescue Coordination Center (MRCC Delgada).

The fire in the cargo hold was still active as of Thursday.

Felicity Ace’s crew members have since been transferred from the tanker Resilient Warrier to the Horta airport by a Portuguese Air Force EH-101 aircraft.

The owners of the Felicity Ace have arranged for a tow of the burning the ship.

The Portuguese Navy ship NRP Setúbal has remained on scene to monitor the situation.

Felicity Ace departed from Emden, Germany on February 10 and was en route to Davisville, Rhode Island when the fire occurred in the ship’s cargo hold.

The ship is reportedly carrying a cargo of Porsches and Volkswagens, as reported by the website The Drive.

The Felicity Ace is registered in Panama and was built in 2005. It is operated by Japanese shipping line Mitsui O.S.K. Lines (MOL).

The Portuguese Air Force has now released video of the rescue: The fire is reminiscent of the Sincerity Ace which caught fire in the Pacific Ocean approximately 1,800 nautical miles from Oahu on New Year’s Eve in 2018.

Five crew members died in that accident and the ship was eventually towed back to Japan. Sincerity Ace was owned and managed by Shoei Kisen Kaisha, owner of the Ever Given.

A recently published NTSB report on the Hoegh Xiamen fire, which took place at the United States’ Port of Jacksonville, said an improperly disconnected car battery in a used vehicle started the fire.