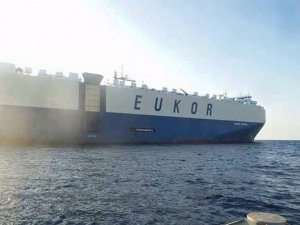 The vessel was en route from South Korea to Misrata, carrying more than 5,000 Korean KIA and Hyundai cars on board. According to the local authorities, the Marshal Khalifa Hafter militants sent several warnings to the crew not to enter Libyan waters, but the duty officer neglected them and proceeded on previously planned route. Near Susah, the vessel was approached by motor skiff with heavy armed men with RPG, who ordered to car carrier to stop engine and seized it. The militants took control of the car carrier Morning Compass and ordered to anchor off Libyan coast.

The shipowner is in contact with the local authorities, who are negotiation for releasing of the vessel. There is no additional information about the reason of seizing and no information, when the ship will be released. All the crew is safe and in good health.

This news is a total 1537 time has been read
Tags: Car carrier Morning Compass seized by Libyan militants off Susah