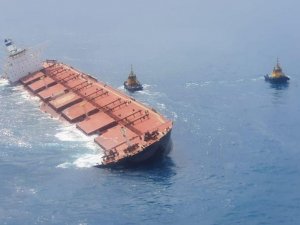 The Very Large Ore Carrier (VLOC) Stellar Banner aground off the coast of Brazil, February 26, 2020. This incident was not covered in INTERCARGO’s 2019 casualty report.

Last year, the dry bulk shipping sector suffered only one total loss among the 39 tallied since INTERCARGO began reporting in 2010. These 39 losses have resulted in 173 total deaths.

In this year’s report, INTERCARGO highlights the loss of the bulk carrier Nur Allya in August 2019 as casting a shadow over the industry’s otherwise excellent safety performance in 2019.

The 52,000 dwt Nur Allya went missing along with its 25 crew members on August 20, 2019 while transporting a cargo of Indonesian nickel ore off the northern coast of Buru Island, Indonesia. Nearly two weeks went by before searchers found one of the vessel’s lifeboats, marking the first sign of the vessel. Although the cause of the sinking is unknown, following the incident INTERCARGO reiterated its warning to industry to use extreme caution when loading nickel ore due to its tendency to liquefy and cause cargo shift.

“This incident alone clearly demonstrates that there is no room for complacency, and INTERCARGO calls for a prompt and thor ough investigation into this tragic loss. It is only through effective root cause analysis that appropriate corrective actions can be put in place to ensure that such an accident never happens again,” INTERCARGO said in its report summary.

Cargo failure/shifting and liquefaction is the most deadly safety issue facing dry bulk shipping today. Among the 39 total losses suffered by bulk carriers from 2010 to 2019, eight have been attributed to cargo failure resulting in 106 lives lost, according to INTERCARGO, representing over 61 percent of deaths in the sector.

The report also highlights the prompt publication of casualty investigation reports as being a key objective of the bulk shipping industry. INTERCARGO notes that only 24 of a total of 39 bulk carrier losses, or about 62 percent, have had their investigation reports made available on the IMO Global Integrated Shipping Information System (GISIS) database at the end of January 2020. In fact the average time from incident to a report becoming available has been 32 months for these investigations.

“Lessons learned from past incidents play an important role in determining where additional safety improvements are necessary both at an industry and an international level,” INTERCARGO said.

“It is vitally important that casualty investigation reports are submitted to the International Maritime Organization (IMO) in a timely manner so that the root causes of serious incidents can be properly identified and the appropriate corrective actions taken.”

INTERCARGO has also welcomed the latest amendment to the International Maritime Solid Bulk Cargoes Code (IMSBC 05-19), which will enter into force on 1 January 2021. The Code incorporates the lessons learned from the loss of the Bulk Jupiter which was carrying a cargo of bauxite fines.

Finally, the report also noted the investigation into the March 2017 loss of the Stellar Daisy found that found that vessel foundered due to a structural failure in the No. 2 port side water ballast tank that initiated progressive structural failure within the cargo length and caused a total loss of buoyancy.

“The IMO is expected to consider additional measures for bulk carrier safety in Safety of Life at Sea (SOLAS) chapter XII, and the 2011 International Code on the Enhanced Programme of Inspections during Surveys of Bulk Carriers and Oil Tankers (2011 ESP Code). These measures are aimed at closing gaps that were identified and reducing the potential for similar very serious marine casualties involving bulk and ore carriers,” INTERCARGO said.

This news is a total 2758 time has been read
Tags: dry bulk shipping, intercargo