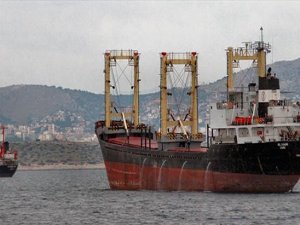 A fire broke out on board a Togo-flagged general cargo vessel which was moored near Elafonissos, Greece, the Hellenic Coast Guard said.

The fire started in the afternoon hours of 11 November. Its origin has not been determined so far.

The ship — with fourteen crew members on board — has been identified as the 6,500 dwt Al Hani. It arrived from Libya and was on its way to Turkey at the time of the incident.

As informed by the coast guard, two patrol boats were immediately sent to the scene.

One of the patrol boats evacuated the master and the seafarers aboard Al Hani. Firefighting teams managed to extinguish the fire on 12 November. An investigation into the incident has been launched.

The Port Authority of Neapolis Vion has banned Al Hani from departure and initiated a procedure to impose administrative sanctions, according to the Hellenic Coast Guard. Built in 1984, Al Hani is owned by Lebanon-based Global Management & Trading, data provided by VesselsValue shows.

The shipowner reportedly hired a private company to provide salvage services and handle the incident.

No oil spill has been detected so far. In 2020 alone, Al Hani suffered technical issues three times. In addition, the vessel experienced an explosion in the engine room while anchored in Kerch Strait, Black Sea in February this year.

This news is a total 3141 time has been read
Tags: Cargo ship catches fire off Greek coast, crew evacuated , deha24

Bulk Carrier Crew Member Killed by Large Wave Off Nova ScotiaA crew member of a bulk carrier has died and three others injured after their ship was hit by a large wave several hundred miles off the coast of Nova Scotia on Saturday.

Product Tanker Crewmember Stabbed and Killed by a ShipmateA crewmember aboard a small product tanker was killed in an assault by one of his crewmates while the vessel was under way off the coast of Taiwan, according to Taiwanese authorities. Bunkering vessel hijacked in Gulf of GuineaThe piracy situation in the Gulf of Guinea continues to be critical with yet another hijacking incident occurring near south Lome this week. Cargo ship catches fire off Greek coast, crew evacuatedA fire broke out on board a Togo-flagged general cargo vessel which was moored near Elafonissos, Greece, the Hellenic Coast Guard said.