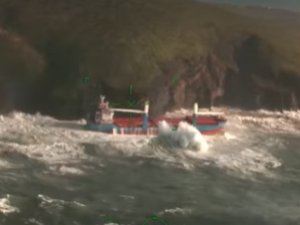 An Italy-flagged cargo ship ran aground off the coast of south-western Sardinia after encountering rough weather on December 21, 2019, the Italian Coast Guard said.

The 8,100 dwt vessel, identified as Cdry Blue, was hit by strong waves and crashed into a cliff in Torre Cannai, Sant’Antioco.

At the time of the incident, the multipurpose ship was en route from Cagliari, Italy, to Alicante, Spain, with twelve crew members on board.

The coast guard immediately sent boats and helicopters to the scene on late Saturday. However, rescue efforts were hampered by poor visibility and inclement weather conditions.

The coast guard helicopter managed to evacuate the crew of Cdry Blue the next day. No injuries were reported.

The 2010-built cargo vessel, which is operated by Italy’s Nuova Naviservice, reportedly suffered damages but salvage operations have not been possible due to severe weather.

Local authorities continue monitoring Cdry Blue to check its stability and prevent any potential oil spills, according to the coast guard.