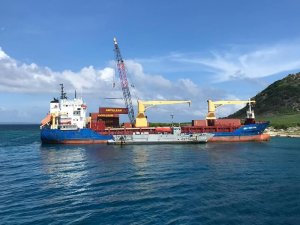 The Tanzanian-flagged singledecker Habib Express, which grounded off the Beata Island in the Dominican Republic in late September, was refloated on October 7.

The cargo ship had been en route from Miami, Florida, to the port of Haina when its bow beached on September 11.

The 2,800 dwt ship was refloated in a multi-agency operation which involved the Dominican Navy, the country’s maritime rescue agency and Svitzer Caribbean Dominicana among others.

Habib Express was subsequently escorted to the Port of Cabo Rojo for an evaluation of damages.

AIS data from MarineTraffic indicates that the ship got underway from the Port of Cabo Rojo on October 11 and arrived at the Las Calderas port in the Dominican Republic a day later. The ship is expected to be dry docked there for necessary repairs.

This news is a total 280 time has been read
Tags: Cargo Ship, Grounding, Habib Express