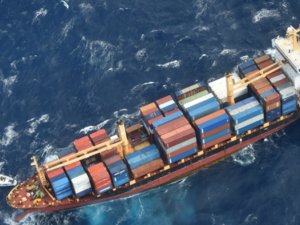 A Singapore-flagged containership has rescued three people from their battered yacht several hundred miles from New Zealand after a rigging accident apparently killed two other people on board the boat.

The country’s Maritime New Zealand has confirmed that two men and a woman were rescued Tuesday from their battered yacht, Platino, around 340 miles north of New Zealand by the crew of the container ship Southern Lily.

The crew of the Platino alerted Rescue Coordination Centre New Zealand (RCCNZ) at 11.20 a.m. Monday (June 13) reporting that one male had been killed and another man, aged 63, was knocked overboard after the 20-meter yacht lost its rigging in winds of up to 75km/h (40 knots).

By 12:30 p.m., an Orion P3 aircraft from the Royal New Zealand Air Force had located the boat and started searching for the missing man as commercial vessels in the area were diverted to assist the crew on the yacht.

yacht platino
Overnight the yacht’s condition deteriorated as it lost steering and began taking on water. Photo: New Zealand Defence Force
After arriving on scene on Tuesday, the containership Southern Lily was able to attach a line to the yacht and get the three survivors on board at about 3 p.m. as the search for the missing man continued.

The body of the other victim remains on board the abandoned yacht because it could not be safely transferred in seas up to three meters. Before leaving the yacht the crew activated an EPIRB on the yacht to aid in tracking its location.

The search involving the P3 Orion aircraft was called off Wednesday after turning up empty.

The victim is understood to have been relatively lightly clothed and not wearing a lifejacket.

RCCNZ search and rescue mission coordinator John Dickson praised the master and crew of the Southern Lily for he said was a difficult operation.

“It was not easy to get the three crew members from the yacht to the much larger ship in those sea conditions – they’ve done a tremendous job,” commented SAR coordinator John Dickson. “We are obviously disappointed that it was not safe to transfer the body of the deceased crew member, but safety must come first. We will keep track of the position of the yacht.”

Following the rescue the Southern Lily continued its voyage to Auckland, where it was expected to arrive sometime Wednesday.

RCCNZ has issued a notice to ships traveling through the area to be on the lookout for the man.

“This is obviously an extremely difficult time for the family and our thoughts are with them.”

This news is a total 8158 time has been read
Tags: Cargo Ship Rescues Sailors Off New Zealand After Two Crew Die in Rigging Accident