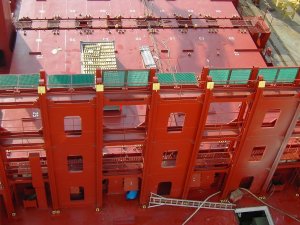 The container ship industry faces some big challenges over the coming years, including preventing lost and damaged cargo and mitigating the growing risk of onboard fire.

On the subject of fire, he says: “Regulations for dangerous cargo are not always adequately enforced. As a result, cargo and vessels are damaged and vessel downtime increases.”

On average, 1,582 containers are lost at sea each year, according to the Alliance Global Corporate & Speciality Safety Shipping Report 2019. “Heavy weather and lashing failures are recognised as a common root cause,” notes Mr Lange.

Transparency of operational vessel performance is also a growing consideration, as are environmental regulations, including IMO’s emission limits.

The industry has reacted to these challenges with new rules, including the ‘risk zone’ concept, part of the Cargo Incident Notification System (CINS) initiative. “The risk zone concept not only considers the segregation of dangerous goods according to IMDG, but also different zones onboard a ship. It thus ensures that explosive substances, for example, are not stowed near the engineroom,” explains Mr Lange.

Regarding the issue of lost containers and the need to optimise vessel utilisation, class has reacted with new lashing rules, with more modern lashing patterns that take into account larger ships and higher stacks. Furthermore, the new lashing rules take route-specific and weather-specific features into account. Navis’ MACS3 loading computer incorporates the latest lashing rules of all major classification societies. Mr Lange says: “By utilising the lashing updates, StowMan and MACS3 assist the ship operator to load more flexibly and therefore may increase cargo intake so that improved vessel utilisation can be achieved.”

To optimise the information flow between maritime stakeholders, Navis has made key calculation results of the loading computer available in the cloud. Launched in September, MACS3 Connected means that ship managers have improved visibility of current and historical loading conditions, says Navis product manager cloud services Bastian Gehnke. He adds: “In case of emergency response, much faster data exchange and data availability can be granted. The scenario of sending loading conditions as a pdf via email between the vessel and the office ashore, while not being sure if this is the latest version, can be now banned to the past.”

As vessels have increased in size, so cargo-securing techniques have evolved to cope with the added scale. For example, external lashing has become almost standard, especially on larger vessels, because it allows operators to transport greater weights.

DNV GL inspector of cargo stowage and securing Daniel Abt says this is the first time that the three-dimensional behaviour of a container stack has been considered in stowage software.

He comments: “This model is more physically correct than any other model. The 3D approach is completely different to previous analytical approaches as it also takes into account the torsional strength of the containers. If you can calculate more accurately, you can optimise stowage, and this helps large vessels with external lashings systems. Our previous assumption was quite conservative and now our calculations are more precise.”

This has led to ships being able to load more containers; indeed, Mr Abt says it has made a “huge difference in how much cargo they can handle.” He does however note that in a few cases, more accurate calculation models may lead to slightly more restrictive container stowage.

DNV GL created the model based on tests at the Pella Sietas shipyard in Hamburg.

Mr Abt says: “This is the first time that a full container model has been based on real, full-scale tests and allows the new calculation system to better know the distributions of forces in the container lashing system. The full-scale testing of different container stack configurations has been used as a basis for dynamic transient simulation, which is reflected in the 3D model.”

DNV GL has also optimised its software to enable faster calculation times. Mr Abt says: “The dynamic transient simulation software used before meant that these calculations usually took eight hours per stack. In the stowage software we have developed, we can now perform the same calculations in under half a second. That is quite incredible. Improving the calculations to achieve these results has been a very complex undertaking.”

Fellow class society ABS has been actively supporting several initiatives related to container securing, including investigating the impact of stack dynamics on container securing systems. The aim is to provide better insight into the dynamic loads and response of container stacks and lashing systems as regards ship motions and hull response in waves.

ABS has developed a Dynamic Link Library (DLL) within its ABS C-LASH software programme. ABS containership market sector lead Jan de Kat says: “The DLL is a fast, executable code that can be easily linked to existing loading computer software systems. It has been distributed to loading instrument providers and allows them to incorporate the ABS C-LASH approach into their software.”

2019 updates to the ABS Container Securing Guide include an update to the tables of allowable stack weight below deck. In addition, ABS has introduced an approach to weather-specific lashing for vessels on short voyages.

Highlighting challenges that container ship operators face when it comes to container stowage, Mr de Kat explains: “As a vessel is unloaded, its center of gravity may be lowered and with the resulting increase in metacentric height (GM), the natural roll period may decrease, with the vessel becoming more susceptible to the encountered wave periods, which in turn may lead to higher accelerations.

“One driver for the weather-specific approach is to allow operators to take advantage of lower forces expected with benign weather when transiting on a short voyage, an approach which could lead to a reduction of necessary re-stowage of containers.”

The advent of very large and ultra large containerships has led to an increase in the number of containers stacked above deck. Mr de Kat says says: “Semi- and fully-automatic twist locks have been introduced to speed up the container loading and unloading process, with the benefit of safer stevedoring.

“At the same time, however, higher stack heights and twistlock gaps result in effects that are not covered by traditional linear analysis methods. This may lead to an underestimation of loads acting on the containers and lashing system. Hence, the ABS cargo loading software solution C-LASH is designed to capture these effects and alert operators to risks.”

As noted, fire safety has been another significant challenge for containerships and ABS has updated its Guide for Fire-Fighting Systems for Cargo Areas of Container Carriers. This guide outlines optional notations that provide crew protection, means of detection, firefighting systems and equipment that exceed minimum SOLAS requirements. Mr de Kat explains that the guide was developed in close co-operation with shipping companies and based on lessons learned from recent containership fires.

ABS technology can also be applied to assessing the impact of ‘non-linearities’ on container stacks for feeder size container ships. “Smaller container ships commonly use a linear lashing analysis in view of the limited stack heights,” says Mr van Kat.

However, a recent study carried out for several ships with capacities between 3,000 and 4,000 TEU suggests that nonlinear effects, such as twistlock gaps, can lead to significantly higher lashing rod loads and corner compression forces than predicted by linear analysis.

Cell guide design developmentThe growing number of 45 ft containers, in addition to the larger size of ships, has had an impact on cell guide development.

Cell guides are used under deck, on deck, or in hatch coverless vessels, encompassing tank top to uppermost containers.

He adds that the cell guide design needs to cater for possible different widths of containers, by adjustable cells or by solutions with loose lashings.

Highlighting the impact of recent developments, Mr Tirkkonen says: “For Europe trades, the growing number of 45-ft containers creates challenges for cell guide design, because use of movable cell guides or other solutions need to be considered.”

In the case of too-high stacks and considering container strength, he says that the MacGregor stack splitter can be used to cut the stack in cells.

Speaking about the impact of larger container ships, Mr Tirkkonen says: “Basically, when the cell guides are higher, the complexity of random stowage has to be considered and the strength of cell guides has to be ensured, with consideration of connection to the ship’s structures.”

Other developments relate to cargo loading software. Mr Tirkkonen says that previously the stack weights of containers in cell guides were based on tables provided by classification societies. He says: “Today, on deck and in hold, MacGregor software can take care of the correct and safe planning of the loading in cells with or without stack splitters and also leave a clear documentation.”

1989 – 2006: Maritime Research Institute Netherlands (MARIN), Wageningen, the last seven years of which as director of research and development.