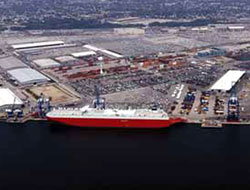 A ship's crew have been stranded in Dundalk with only a day's food supply left.

A ship's crew have been stranded in Dundalk with only a day's food supply left.

A ship's crew have been stranded in Dundalk with only a day's food supply left, according to the International Transport Workers' Federation (ITF).

The ITF said today eight crew members of the Linda in Dundalk have contacted it after being left stranded on board their 1,000-ton vessel since July 13th, and that they are owed at least $60,000.

In addition to the low supply of food, there is only enough fuel on board to supply heat and light to the vessel for about a week and there are concerns over the health of the Russian captain, the ITF said. Two other officers are Russian, and the five crewmen are Ukrainian.

In a statement, the ITF said the ship was "effectively abandoned" in Dundalk after being inspected by Port State Control, which identified eight breaches of safety regulations. "The crew carried out essential repairs to the engine but Forestry Shipping refused to pay bills to local creditors and cancelled the captain"s mobile phone account."

Two other vessels, the Fairland and Defender are being detained in the Netherlands by the ITF over non-payment of wages, the organisation added.

?What they are doing is using vessels like the Linda , which is a 42-year-old rust bucket, and does not even have much scrap value," Mr Fleming said.

?Linda"s cargo of wood was discharged by the crew in good faith so they have no leverage over the company. Unfortunately Dundalk is one of a growing number of ports in Ireland where shore-based dockers and other workers are being displaced by seafarers who are unloading their own vessels, often with no proper training and for no extra pay. In this case the men are working for no pay at all," he said.

In March, Customs officers in Cork arrested the Defender , owned by Latvian-based Forestry Shipping, on foot of a High Court order granted to the ITF after its crew claimed they had not been paid for a number of months.

This news is a total 2331 time has been read