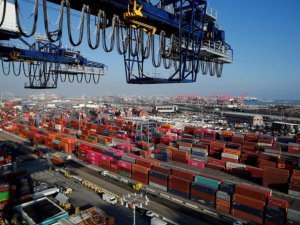 Executive Director at the Port of Los Angeles announced Thursday that the port moved a total of 9,337,632 TEUs in calendar year 2019, just shy of the port’s second-busiest year (2017) in its 113-year history and 1.28% off 2018’s record-setting volumes.
The near-record volumes come despite a more than year-over-year 17% decline in total TEUs in December 2019, a 12% drop off in November, and 18% drop off in October.
Seroka blamed lagging exports for the decline in overall cargo volumes. Overall, 2019 exports were up a 3.7% to 4,473,788 TEUs year-over-year, but still down a modest 0.4% from 2017’s peak of 4,491,644 exported TEUs.
“In the face of lagging exports due to international trade tensions and tariff uncertainties, the Port of Los Angeles has maintained strong momentum and kept cargo flowing,” Seroka said. “This feat was only possible because of the extensive cooperation and continued efficiency improvements by our terminal operators, supply chain partners and longshore workforce.”
In his speech before at the annual State of the Port event hosted by the Pacific Merchant Shipping Association on Thursday, Seroka outlined a number of Port initiatives that will take shape in 2020 and beyond, including initiatives for terminal efficiency, digital leadership and workforce development.
“It’s time for the courage and long-range vision to imagine what this Port will look like in the years ahead and set a course in that direction,” Seroka said. “It’s going to take collaboration to keep cargo volumes strong and our Port community thriving in the midst of increasing competition, an uncertain trade environment and a world where technology is essential to success.”
Seroka also reiterated 2020 as an important year for ongoing implementation of the port’s Clean Air Action Plan, as well as the its continued pursuit of zero-emission technology to further build on emission reductions achieved over the last decade. Currently the Port is testing 78 zero-emission drayage trucks and 74 zero-emission yard tractors, and working with Port partners to test eight new zero-emission top handlers in the coming year. On tap for 2020 will be additional demonstration projects, including a new large-scale zero-emission drayage truck project testing a fleet of 50-100 zero-emission trucks, Seroka said.

This news is a total 772 time has been read
Tags: Port of Los Angeles , U.S.-China trade war.