Caribbean tanker rates up on port 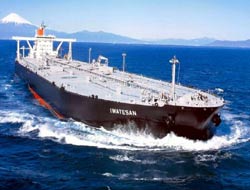 Vessels on Friday were hired for an average rate of Worldscale, or WS, 410, a 59 per cent increase from WS 258 on June 6, according to Houston-based Lone Star, RS Platou and New York-based Poten & Partners.

That's equal to about US$86,000 a day after expenses such as fuel and port fees. 'The storage tanks are full, ships are getting delayed anywhere from three to six days, and this causes everyone to back up and fix other ships' for additional deliveries, Bruce Kahler, a Lone Star broker, said. 'This has built up the market to a crazy level,' he added. 'We have definitely peaked and we are going to come down almost as fast as we came up.'

Rates tend to rise as offloading problems prompt delays or rough weather in the Caribbean or other regions force charterers to find other available ships for voyages. Thirty-two crude-oil tankers arrived in the Gulf of Mexico last week, according to Bloomberg data.

Worldscale points are a percentage of a nominal rate, or flat rate, for a specific route. Flat rates, quoted in US dollars a ton, are revised annually by the Worldscale Association in London to reflect changing costs.

This news is a total 1540 time has been read