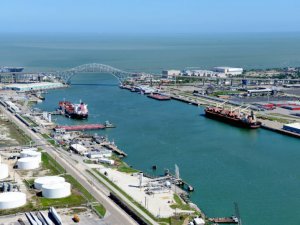 Carlyle Group said on Friday it had dropped out as a stakeholder in Lone Star Ports LLC, which proposed a $1 billion crude oil export terminal near Corpus Christi, Texas.

Sean Strawbridge, chief executive of the Port of Corpus Christi, said Carlyle notified the port on Oct. 8 it would no longer proceed with its investment. That left construction company Berry Group as the sole backer.

Carlyle said in a statement Berry Group was “now the sole owner of Lone Star,” but did not comment on why it dropped out of the project, which it said continues to be actively developed.

Lone Star in September filed a lawsuit against Carlyle in a Texas state court, alleging the private equity firm breached its contract to jointly pursue the project and asking the court to award it full ownership. The lawsuit also sought unspecified damages.

The project was one of at least nine crude oil export terminals proposed for the U.S. Gulf Coast to load U.S. shale oil onto supertankers that carry around 2 million barrels apiece. Carlyle was competing with projects in the same area proposed by commodities trader Trafigura AG and refiner Phillips 66.

“Interest in Harbor Island remains at an all-time high,” Strawbridge said. The port will continue dredging in the area to make it more attractive to export crude, he said.

Lone Star and Berry did not immediately respond to requests for comment.

The U.S. shale boom has prompted a surge in oil exports, which last week hit 3.25 million barrels per day (bpd) and continued to fuel a race to build new export terminals.

However, only one or two of the proposed projects may get built in coming years, with offshore terminals proposed by pipeline operator Enterprise Products Partners LP and Phillips 66 having the best chance of moving forward, said Sandy Fielden, an energy analyst at financial services company Morningstar.

Investors also have grown wary of global oil demand and have questioned “if the world is ready to absorb that amount of additional exports,” Fielden said.

Carlyle’s project had faced hurdles including a months-long delay after regulators called for a full environmental review. It also faced fierce competition with Trafigura, which launched its project earlier, with an easier path to regulatory approval and fewer objections from environmentalists.

Carlyle earlier this year had been looking to sell a 25% stake in the project with companies that operate U.S. pipelines and storage terminals for $625 million, a source familiar with the matter had said.

Enterprise signed long-term agreements with oil major Chevron Corp that advanced its proposed offshore crude export project near Houston, it said in late July, making it the first to make a final investment decision on a proposed deepwater port.

This news is a total 271 time has been read
Tags: corpus christi, US crude exports