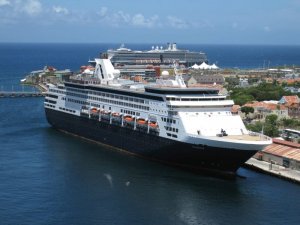 The first ship in the R Class, the 61,849-ton Rotterdam was introduced in 1997 and has a capacity of 1,404 guests. Finally, the 62,735-ton Amsterdam joined the fleet in 2000 as the final of four R-Class ships. It has capacity for 1,380 guests and most recently operated the line’s Grand World Voyage.

“It’s always difficult to see any ship leave the fleet, especially those that have a long and storied history with our company,” said Stein Kruse, chief executive officer of Holland America Group and Carnival UK. “However, Holland America Line has a bright future ahead that includes recent Pinnacle-Class additions, with a third sister ship next year that will continue to maintain our overall capacity in the marketplace.”

Last week, Carnival Corporation said that as a result of the pandemic it plans to reduce its fleet by 13 ships, representing a nearly 9% reduction in capacity. The company expects only five of the nine ships on order to be delivered.

This news is a total 1315 time has been read
Tags: carnival corporation, coronavirus, cruise ships