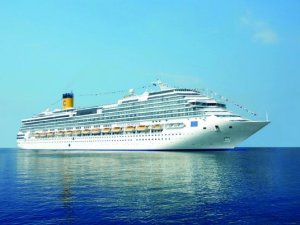 Miami-based cruise operator Carnival Corporation signed a memorandum of understanding (MOU) with China Merchants Group (CMG) to explore the possibility of setting up a first domestic Chinese cruise line, as well as developing cruise ship destinations around the country.

Through the second possible joint venture, called the Port & Destination Development Joint Venture, CMG and Carnival Corporation would collaborate to develop turnaround and transit ports within and around China beginning with a flagship port currently being developed by CMG called Prince Bay Cruise Terminal in Shekou, which is located in Shenzhen. The partners would work to have cruise ships sail from this flagship port, while also developing other cruise ship destinations across China and Northern Asia.

Costa Serena joins Costa Atlantica, Costa Victoria and Sapphire Princess already homeported in China. Carnival Corporation has grown its market presence by 140 percent from 2013 – 2015 and expects to carry 500,000 cruise passengers in China in 2015.