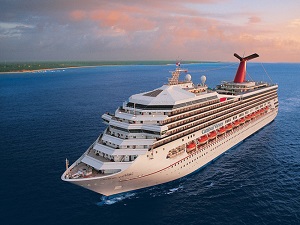 Carnival Cruise Line has cut the first steel and revealed the new livery for its 180,000-ton XL vessel that will be the first-ever ship operating in North America to use LNG.

The vessel will be the line’s largest vessel to date and the first to be powered by LNG.The steel-cutting ceremony was held at the Meyer Turku shipyard in Finland, and the vessel is expected to be delivered in 2020. A second XL ship will start construction in 2020 and be delivered in 2022 to mark the 50th anniversary of Carnival Cruise Line's founding.

The first ship will have a red, white and blue hull design that celebrates its U.S. legacy. The design was developed by New York-based Bluarch Architecture and is inspired by officers' uniforms along with vibrant red and white accents running the length of the 5,200 passenger, 1,130-foot-long ship.The ship will operate from Port Canaveral, Florida, and her name is scheduled to be revealed in early December.