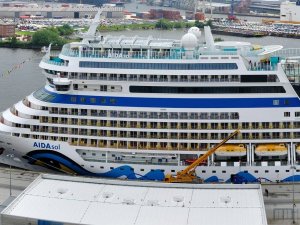 Carnival modified voyages on its cruise ships to match requested time of arrival from and berthing capacity in the Port of Hamburg, Germany, reducing bunker costs and emissions throughout the route.

“We are committed to making cruising more sustainable and to setting an example in greener and safer operations,” said Mr Salzmann. “For this, we welcome the development of new and more efficient technologies, such as Wärtsilä Navi-Port.”

AidaSol and AidaPerla both have Wärtsilä NACOS Platinum navigation systems that were connected directly to HVCC “which allowed continuous communications, resulting in JIT arrivals in Hamburg,” said Mr Salzmann.

There were also benefits to the port operator, said HVCC managing director Gerald Hirt. HVCC is responsible for the operational co-ordination of vessel traffic into and out of the Port of Hamburg in close collaboration with the relevant authorities. “Terminals, shipping companies, and port service providers make use of our operational services for the arrival of large-sized ships, feeder ships and inland waterway vessels in the port,” Mr Hirt explained.

HVCC is a frontrunner in terminal-carrier communication. In 2019, it distributed more than 3,800 passage plans to ships.

Wärtsilä Navi-Port is a middleware that is hooked up to Wärtsilä’s Fleet Operations Solution suite. It applies the port call message standard as defined by the Sea Traffic Management (STM) validation project, in which Wärtsilä was a key contributor. During STM developments and trials, more than 300 vessels participated, of which 130 used Wärtsilä navigation systems.