Carriers That Don’t Order Big Ships Will Be Left Behind 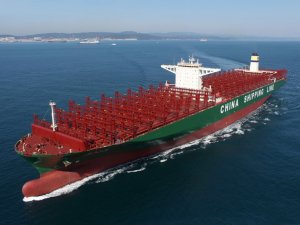 According to Drewry’s Container Insight, there is not enough cargo for everyone to have ULCVs so future orders will be dictated by alliance needs and not those of individual lines.

The window of opportunity for carriers to order 18-20,000 teu mega ships is closing and those that do not make the leap will struggle to compete on slot costs, UK shipping consultant Drewry believes.

According to Drewry’s Container Insight,  there is not enough cargo for everyone to have ULCVs so future orders will be dictated by alliance needs and not those of individual lines.

“In the short-to-medium term the demand simply does not exist for all lines to have 12 x 18-20,000 teu ships required for a weekly service of their own. What this means is that the container industry will effectively become a two-tier arena with the haves enjoying far greater economies of scale over the have-nots. The new mega-alliances will offer the have-nots access to the big ships through vessel sharing agreements,” Drewry said.
Although they are yet to be confirmed, the highly anticipated orders by G6 Alliance carriers OOCL and MOL for two sets of 6 x 18-20,000 teu ships would be a clear example of this way of thinking, Drewry believes.

“This approach will spread the benefits across the alliance members – assuming the costs are equally shared – and at the same time will prevent the industry being flooded with far too much capacity,” the consultant added.
The expected orders from MOL and OOCL will enable the G6 Alliance to join the big ship club, but they will merely limit the damage to alliance’s market share in the East-West trades as other carrier groups have bigger plans in place. Despite this fact, at present it seems unlikely that more orders from other G6 members will materialise in the near term.

Having made the first move, the 2M carriers, Maersk and MSC, have a distinct advantage in terms of 18-20,000 teu ships already on the water with another 360,000 teu worth to be delivered. However, both carriers are expected to want to extend their advantage with more orders soon.

“The fear for lines that do not make the leap to the big ships is that they will get left behind in terms of cost competiveness, but they can at least take some solace that lower fuel prices are reducing the scale advantage of ULCVs,” Drewry added.
The total sum for ships of 18,000 teu and above, either active or on order, has now passed the 1 million teu mark with the latest order from Evergreen for eleven 20,000 TEU ULCVs, Drewry went on to say.

This news is a total 1779 time has been read
Tags: mega-vessels, News by topic, Shipbuilding, SHIPPING, shipyard