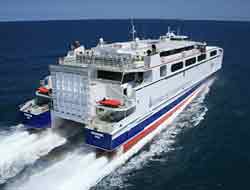 Following the launch in December of Osman Gazi-1, the first of two Auto Express 88 fast car ferries for the IMM, an Inaugural Voyage for Representatives of the Operating Cities of Turkey.

Following the launch in December of Osman Gazi-1, the first of two Auto Express 88 fast car ferries for the Istanbul Metropolitan Municipality, an Inaugural Voyage for Representatives of the Operating Cities of Turkey was held on Monday 12th March 2007.

This was to commemorate the successful completion of sea trials prior to the ferry traveling to Istanbul to commence operations. Designated to operate on a 39 nautical mile reciprocal service across the Marmara Sea between Yenikapi (Istanbul) and a new port development in Mudanya servicing the city of Bursa, Osman Gazi-1 is scheduled to enter service in April 2007, the same month the second ferry will be launched.

Present in Austal’s West Australian shipyard for the ceremony and sea trial included; the Mayors and Officials from the cities of Bursa, Mudanya and Güzelyali, representing the ports the ferries will travel between, Senior Officials from the Istanbul Metropolitan Municipality, the buyer of the ferries, and the Management and Crew from Istanbul Deniz Otobusleri, the ferry operator and on-site construction representatives.

A one hour sea trial followed the formal events during which time speeds exceeding 43 knots were achieved, to the delight of the visitors who experienced the ride in the comfort of the luxurious upper deck passenger accommodation.

The performance of the fast ferry has also been impressive on official sea trials, with a higher than contract speed of 37.4 knots achieved at operating deadweight, 90% MCR (power) and with operational Ride Control System. With four MTU 20V8000 M71R engines installed at the reduced (R) maximum rating of 7,200kW @ 1,150rpm, this allows for low engine stresses, increased fuel efficiency and longer intervals between engine overhauls. These criteria were all important factors in the competitive international tender process that preceded the purchase of these vessels calling for a thorough investigation and review prior to the final selection of the propulsion equipment package.

Designed to carry 225 cars, or 158 cars and 128 lane metres for trucks and buses, the car deck features mezzanine levels across all lanes with the center mezzanine capable of being lifted for truck and bus access. With an open bow above the forward turning area the aft loading point features combined vehicle and passenger ramps for quick deployment and retrieval enabling fast port turnarounds.

Two spacious upper seating levels with 360 degree panoramic window views have the capacity to carry 938 passengers on the lower level and 246 passengers above where also two additional VIP cabins provide lounge seating for 16 for a total of 1200 passengers.

All passengers on the lower level enjoy Beurteaux Tourist seating in a mixture of standard rows and table settings with two large kiosks providing catering forward and aft. Upper level passengers share a kiosk and are seated in the larger Beurteaux 300 Series Club seats featuring leather trim. Beurteaux VIP Ocean Lounges are provided for the VIP cabins. An audio-visual installation provides a wide selection of entertainment to the various areas via speakers and numerous flat screen televisions mounted throughout the passenger levels. Passenger comfort at high speed is aided by Austal’s fully active SeaState Ride Control System featuring forward T-foils and transom mounted interceptors providing dynamic pitch and roll stabilisation in higher sea states. Safety is, as ever, uncompromised with the installation of passenger evacuation systems and the classification of the ferries to Germanisher Lloyd +100 A5 HSC-Passenger B OC3 notation and the requirements of Turkish Flag.

With unmanned engine room spaces, all vessel and passenger technical operations are monitored and controlled at the engineer’s console on the bridge that also features overhanging docking stations.

This news is a total 1374 time has been read Russian LNG-powered RoRo to arrive in BaltiyskEarlier this month, Russia’s first dual-fuel RoRo-train ferry Marshal Rokossovsky set out from the Port of Tuzla, Turkey to the Port of Baltiysk, Russia.