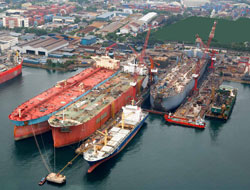 Europe?s shipbuilders will not be hit as hard as their Asian competitors by the nosedive in newbuilding orders.

Europe"s shipbuilders will not be hit as hard as their Asian competitors by the nosedive in newbuilding orders.

Europe"s shipbuilders will not be hit as hard as their Asian competitors by the nosedive in newbuilding orders, according to the Community of EU Shipbuilders" Associations, though a tightening of credit markets does pose a threat.

Europe"s relatively low share of bulker and containership orders ? the markets worst hit by over-ordering and crashing freight rates ? should shield yards from the worst of the fallout, says Cesa Secretary-General Reinhard Lüken.

Just 4% of the European orderbook is made up of bulk carriers, said Mr Lüken, while containerships make up another 16%. Remaining vessels on order are for market sectors which while hit are not in dire straits, such as tankers or specialist offshore vessels.

Mr Lüken, who attended a Paris OECD workshop on shipbuilding earlier this month, agreed that there is already talk of state support for yards in South Korea and China.

?The message I tried to get across is that, if there must be state intervention, it should be aimed at removing excess capacity,? he said.

The crisis to kill off Asia"s massive expansion plans

In retrospect, the crisis might be seen to have arrived just at the right time, he predicted, because it will kill off Asia"s massive expansion plans. ?If this downturn had come later, say in ten years" time, these big yards which are now on the drawing board would actually exist. There would have been a much, much worse disaster which would have lasted for 30 years.?

European yards are, however, struggling with credit lines, Mr Lüken said. The viability of profitable yards active in both construction and repair is being threatened by banks which have withdrawn loan facilities as a result of the credit crunch.

Credit was the ?lifeblood? of the industry, he said. ?If they [the banks] screw up, they will destroy real business.?

Cesa said in a statement today that there had been ?an abrupt halt? to newbuilding orders. ?Cesa is optimistic that European yards are largely well placed due to healthy orderbooks in various niche markets. However, despite limited exposure to negatively affected shipping trades, many European yards are facing irresponsible behaviour by banks, withdrawing credit facilities during the construction period. Cesa urgently appeals to banks and to policymakers to safeguard continued availability of working capital.?

This news is a total 1051 time has been read