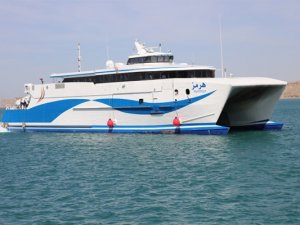 Ferries with the capacity of transporting 240 people and 40 vehicles will operate in the mentioned line which is going to be re-launched after a two-year hiatus, according to Hassan Ebrahimi.

After launching services to Qeshm Island and Bandar Abbas in Iran in 2016, Oman’s National Ferries Company (NFC) launched a direct ferry line from Muscat to the port of Chabahar, located in southeastern Iran in the Sea of Oman, in November 2016.

Earlier this week, the two countries signed a maritime cooperation agreement, aiming for boosting maritime transportation between the two sides.

The agreement was signed in a ceremony attended by senior officials from both sides including the Iranian Minister of Transport and Urban Development Mohammad Eslami and Oman’s Minister of Commerce and Industry Ali bin Masoud al Sunaidy, and heads of the two countries’ ports and maritime organizations.

Under the agreement, Iranian traders and businessmen interact constructively with their Omani counterparts, and regular shipping lines will be established between the two countries, while the two sides will also provide facilities for using each other’s ports.

Ali bin Masoud al Sunaidy traveled to Iran on top of a trade delegation to attend the 18th meeting of Iran-Oman Joint Economic Committee in Tehran.