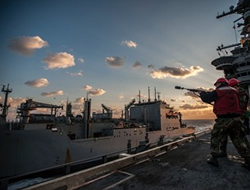 While RAS's are nothing new to the Sailors aboard George Washington, the ship received nearly 700 pallets of supplies at once, three times the amount of a standard RAS. This produced a unique and rare challenge for the Sailors of the ship's supply department.

"The biggest challenge was trying to move all these supplies around as quickly and safely as we could." said Logistics Specialist 2nd Class Damon Candelarie, from San Leandro, Calif. "It involved a lot of cooperation and effort from everyone. For most RASs we normally have around 200 Sailors helping, however, we needed more than 300 for this one."

George Washington conducts approximately three to four RASs over the course of a month while on patrol under normal operating conditions. Due to certain circumstances, the ship was forced to skip some of them.  "Since we were busy operating in the Philippine area to help with [Operation Damayan], we weren't able to get supplies for the ship regularly," said Senior Chief Logistics Specialist Hai Tran, George Washington's shipping and receiving leading chief petty officer. "The supplies we would've got piled up, so once we could do a RAS we ended up taking everything all at once."

This news is a total 1297 time has been read